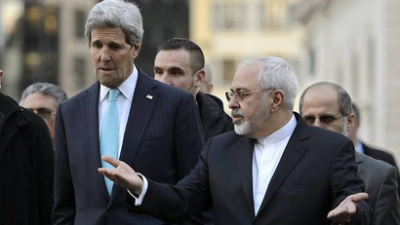 The new set of U.S. sanctions on Iran are just around the corner. For more than forty years, the Iranian regime has been smartly maneuvering to alleviate the impact of economic sanctions and break the long-bitter siege. Jeopardizing the living standards of the Iranian people, the regime has never offered any practical solution to reach a settlement with the international community and to save its debilitated economy.
The first set of new sanctions on August 6, 2018, will target Iran’s Central Bank, foreign businesses in Iran, and its oil revenues. Consequently, Iran will face a severe U.S dollar shortage.
The Iranian regime has until now survived because of variant strategies and plans to circumvent the previous international sanctions. Would the same old tactics work out this time? Would the regional and international variables play a part in this scenario?

Russia: Oil-for-goods agreement
It is a possible scenario to circumvent U.S sanctions that the Iranian government may seek to commence trading oil for goods. Having reached an agreement to exchange oil for goods with Iran in 2017, Russia has become the most likely actor in this scenario. The deal was estimated at $45 billion. It is worth mentioning here that by the end of 2016, the trade volume between the two countries barely reached $2 billion even though sanctions had been lifted, and the two countries developed unprecedented political relations. After the new U.S. sanctions on Iran, the $45 billion target has become far-fetched. According to Iranian economic data published in 2014, Iran-Russia trade was estimated at $1.67 billion. Iranian imported mainly arms and equipment from Russia during the period 2007-2014 which were permitted under the international sanctions, back then. Upon this reality, Russia has offered no real support to Iran to alleviate its economic suffering.
To shed light on the looming ambiguity over its economic partnership with Iran to the Trump administration, the Kremlin, on May 13, negated the statement of Ali Akbar Velayati the foreign policy Adviser to the Supreme Leader Ali Khamenei, in which he said, “President Vladimir Putin agreed to invest $50 billion in Iran’s oil and gas industry.” This was not only quite embarrassing to the Iranian Advisor, but also it sent a clear message to the United States and Iran that future Russian economic support to Iran is almost marginal. This was only three days before the U.S.-Russia Summit held in Helsinki, Finland to discuss issues of mutual understanding and friendship between the two countries.
The Russian Energy Minister Alexander Novak reconfirmed –on the same day- that his country is ready, by collaborating with other oil producers, to pump more oil to the world market to alleviate any potential shortage in supply. He said that a deal under oil-for-goods is not active yet, however, Russia is keen to export its goods to Iran.
In other words, Russia would only support Iran to increase its economic benefit without jeopardizing the interests of its large companies under the new U.S. sanctions. Also, Russia wants to avoid any future conflict with the United States, especially after President Donald Trump had asked the large oil producers to pump two million barrels a day to lower oil prices when Iran’s oil exports are skittled down to zero; a goal confirmed by the Trump administration. It is worth mentioning here that Russia is facing an economic siege imposed by the U.S. and other European countries over its meddling in the 2016 U.S. presidential elections and its annexation of the Crimea.