The International Institute for Iranian Studies (Rasanah) has released its report on Iran’s internal, regional, and international interactions for the month of October, 2018. The report has provided a comprehensive view and depicted the most important developments in Iran during this period in three main parts.

Iran’s behavior and differences between Rouhani’s party and the Reformist Executives of Construction Party:
On the internal affairs, the report handles the Iran Supreme Leader, Ali Khamenei’s call to benefit from the scientific elites, noting that Iran’s behavior has been relying on the trustworthy rather than experienced people since Khamenei’s inauguration. In this regard, the report raises a question about the truthfulness of this call that might have come too late in the pre-downturn era and about disagreement within the Institution of the Presidency between First Vice-President, Eshaq Jahangiri of the Reformist Executives of Construction party and Rouhani’s office manager, Mahmoud Vaezi of the Moderation and Development party after deterioration of Jahangiri powers and his threats to resign. 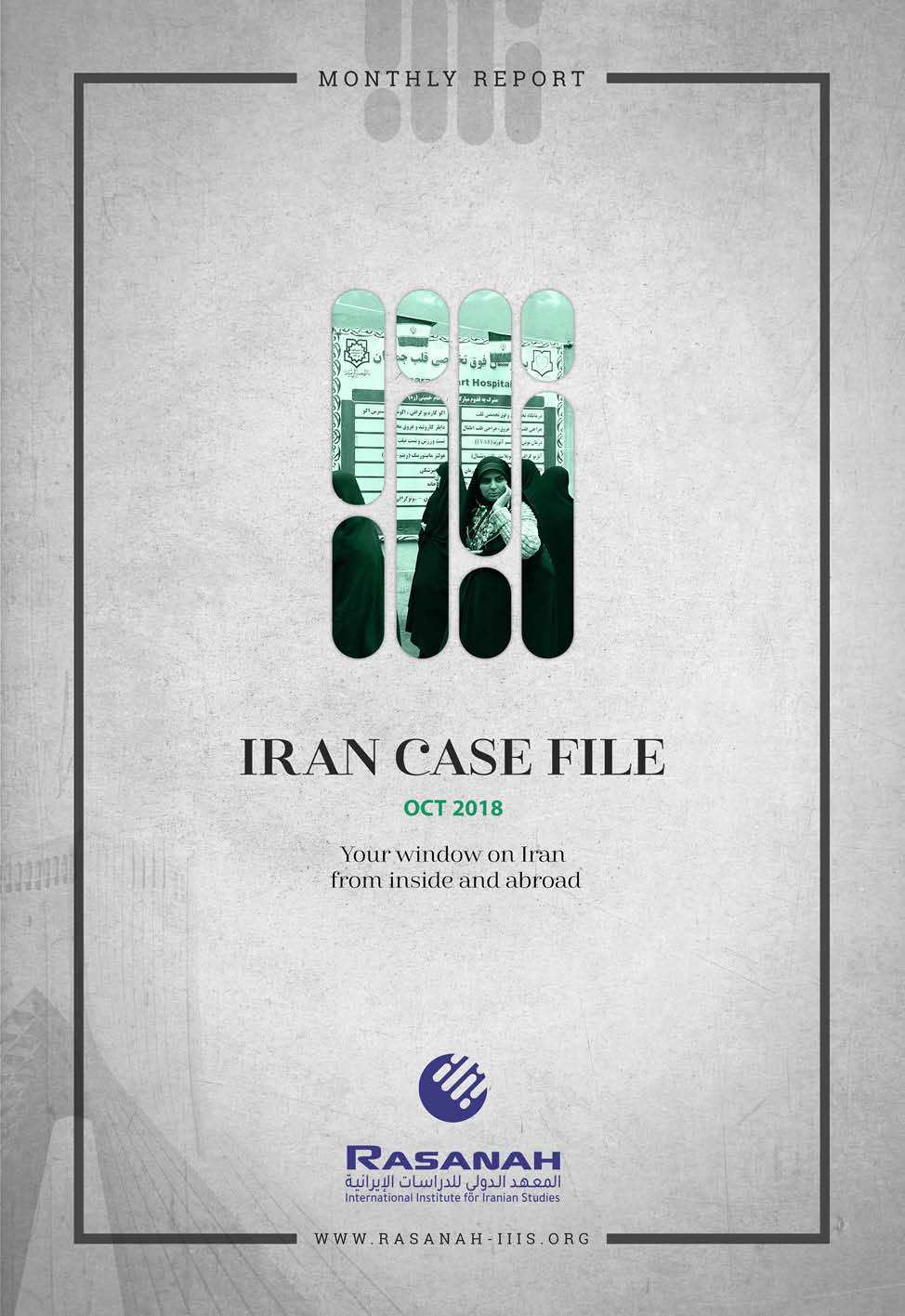 On the other hand, the report discusses the Baloch Jaish Al-Adel Organization’s activity of kidnapping twelve Iranian soldiers in Mirjaveh on the Pakistan-Iran borders to bargain for ransom or release of a number of Baloch prisoners in Iran and other demands. The report also discusses the accusations to the Iranian intelligence services after Denmark had arrested a Norwegian from Iranian origins who was planning to assassinate an Iranian opposition activist residing in Denmark. Accordingly, Denmark has made a proposal to the European Commission to meet on 19 November, 2018 to take action in this regard.

Effectiveness of the European financial transaction channel and the US ability to hinder the European SWIFT system:
The report handles Iran’s economic developments and the European Union’s proposed mechanisms about continuity of trade relations and financial transactions between both sides, given the importance of the EU financial transactions channel known as “SPV”. This mechanism is more important to Tehran than to the European Union that aims to achieve greater security and political goals than trade with Iran. However, the implementation of such mechanism is still unclear as the United States has the ability to hinder the process of using the European SWIFT system by transferring funds directly or threatening banks cooperating with Iran of financial sanctions.
In its second part, the report addresses the most important developments in Iran’s various sectors during October, the ambiguity surrounding the size of Iran’s oil exports, and appointment of four new ministers in the Economic Group in preparation for the new US sanctions in November 2018.

Iran’s role and indicators of staying in Syria and solutions for the Yemeni crisis:
In its part of Arab affairs, the report discusses the Syrian crisis and the most important factors affecting Iran’s role in Syria. It also gives some important indicators about Iran’s long stay by re-deployment and positioning of its forces and proxy militias and seeking to take the biggest part of the reconstruction process in this country.
On Iraq, the report analyzes Iran’s official position on the Iraqi presidential and government elections and the Iranian media reports concerning this issue to investigate Iran’s role in the Iraqi politics in terms of the President of the Republic position between the Kurdish factions and the Prime Minister position between the Shiite parliamentary blocs. Indeed, Iran put two standards to assess the situation in Iraq: first, the Iraqi response to the US sanctions on Iran, especially those related to oil exports; second, signs of an Iraqi desire to return to the Arab world, given restoration of relations with Kingdom of Saudi Arabia and reducing Iran’s influence in Iraq.
In the same context the report addresses the Yemeni crisis and the statements of some American high-ranking officials who stressed on conducting a process of negotiations and finding a political solution for this crisis. In this regard, the report tracks Iran’s ongoing support to the Houthis in Yemen and its threat to the security of Bab Al-Mandib Strait by detaining ships and preventing them from unloading their cargo, leading to a severe humanitarian crisis and increase of Houthi’s threat in the country.

The US-Iran relations in light of Iran’s attempts to avoid the US sanctions:
Internationally, the report tracks the US efforts to intensify pressures on Iran by reducing the Iranian oil exports, imposition of new sanctions along with the already reinstated ones, and facing Iran’s regional influence and establishing an Arab NATO. The report handles the US-Iran relations in the month October 2018 under the title, “The United States and Iran: pre-November 4th Sanctions Developments.”
According to the report, Iran is trying to avoid sanctions and pressures by unifying the home front, avoiding the negative impact of sanctions on the domestic conditions, planning and moving to preserve oil exports as they are the main source of revenues in the country, establishment of an International financial transaction system other than that of the United States to help overcome the US sanctions, attempting to maintain the EU support in the face of the US pressures, and sending messages to Washington that the Iranians are capable of threatening the US interests in the region and its ships and oil cargoes in Bab Al-Mandib Strait.
The report also discusses Russia-Iran relations and Russia’s desire and capability to lessen the US sanctions on Iran’s oil exports by adopting the Russian goods for oil program and the project of transporting Iran’s oil to Russia via the Caspian Sea. In this regard, the report addresses the sanctions facing these two projects in terms of implementation with avoiding additional sanctions on Russia by the United States and the economic feasibility and logistical constraints to this process.
Finally, the report handles relations between Iran and Europe by analyzing the EU economic support to Iran in light of the US sanctions. In fact, Tehran has established four conditions to stick to the nuclear deal related to the European measures to maintain their oil imports from Iran and to open new banking channels to continue making business between both sides.