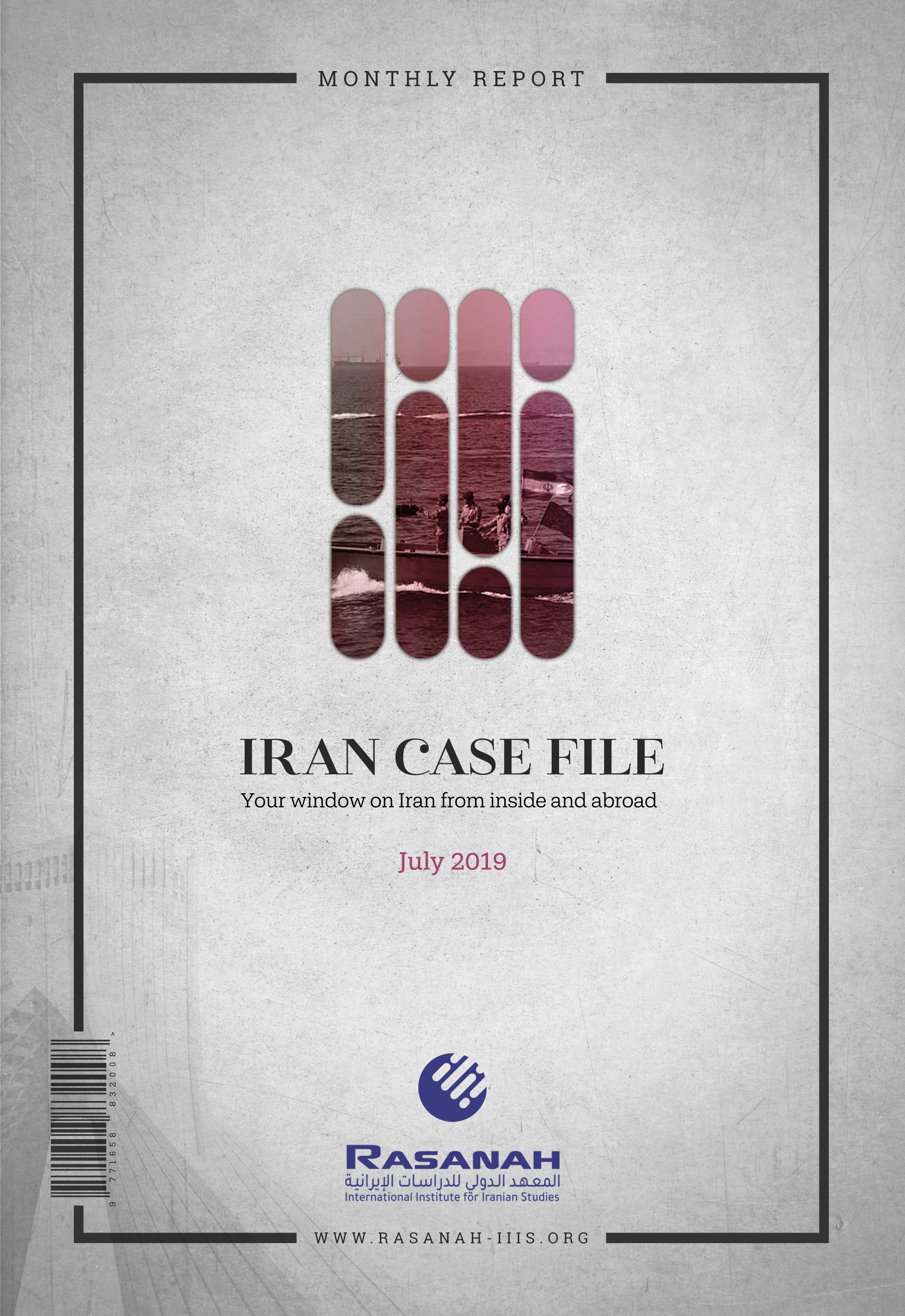 The International Institute for Iranian Studies (Rasanah) has issued its monthly report, Iran Case File for July 2019, providing readers in general and researchers in particular an accurate and detailed review of Iranian affairs, exploring its features and interactions at various levels.  In the The Ideological File, the report discusses  the statement calling on the Supreme Leader Ali Khamenei to resign, signed by 14 activists, indicating a rejection of the Velayat-e Faqih theory by segments of Iranian society which states that the supreme leader is appointed by God and cannot be removed by the constitution but through the Assembly of Experts. The assembly is made up of jurists based on farfetched criteria. The Political File unveils how Khamenei continued his domestic policies which could be described as a ‘no-change policy.’ As the midterm elections approach for the Guardian Council, the Iranian supreme leader renewed the membership of jurists who have maintained their seats for 40 years. This is an indication of Khamenei continuing his policy of keeping a close watch on the presidential and parliamentary elections, which is called in Iran ‘correctional censorship.’ The Economic File discusses the Iranian government’s decision to alter the Iranian budget’s items due to its failure in achieving the target set for oil exports during the first three months of the budget, approved on March 21, which was strong evidence of its inability to run the state in light of the sanctions on Iran’s oil exports. The Military File explores Iran’s test-firing of the Shihab-3 long-range ballistic missile, representing a new sign of defiance against the international community. The move constitutes a violation of UN Security Council Resolution 2231 which prevents Iran from carrying out missile tests that could carry unconventional warheads.

Arab Affairs discusses the Iraqi decision to integrate the Popular Mobilization Forces (PMF) into the regular army in Iraq, which triggered a great deal of controversy. In particular the controversy revolved around the motives behind the decision taken by the Prime Minister Adel Abdel-Mahdi, the scope of its implementation and its repercussions on Iranian influence in Iraq at a time in which the region is in the grip of pre-war dynamics between the United States and its allies from one side, and Iran and its proxies from the other side due to US pressure on Iran and the latter’s targeting of oil tankers in the Arabian Gulf. Tehran aims to disrupt international navigation and to target governmental and diplomatic offices of US allies in Iraq and outside it.

International Affairs sheds light on the United States’ imposition of sanctions on Iran and its militias. Washington sought to establish an international alliance in order to protect navigation in the Arabian Gulf against the Iranian threat. It also pushed for an international decision condemning Iran for breaching the provisions of the nuclear deal. This came as Iran announced exceeding the permissible ceiling set for low-enriched uranium stockpiles and exceeding the permissible enrichment percentage. In EU-Iran relations, the report explores the tense relations between Iran and the United Kingdom over the seizures of oil tankers, Iran’s demands to implement the financial mechanism INSTEX, its insistence on a gradual reduction of its commitments under the nuclear deal and its rejection of French mediation efforts as US sanctions are still in place. In Russia-Iran relations, the report reviews Russian support for Iran after it seized oil tankers in the Gulf. Moscow also issued warnings to the United States against escalating matters as military escalation could result. It also expressed a desire to grant Iran full membership in the Shanghai Cooperation Organization to facilitate trade exchange between Iran and the member state.