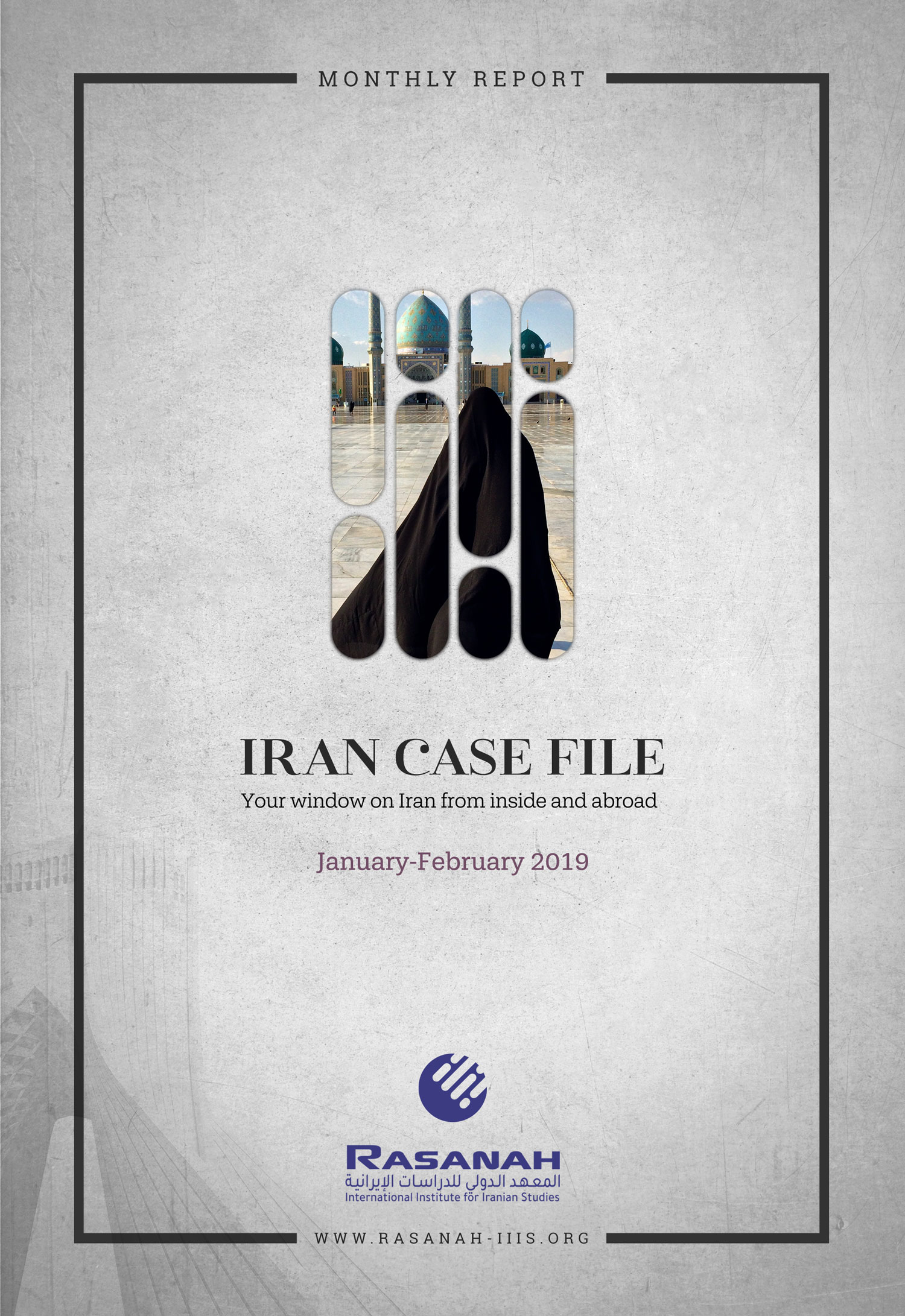 The International Institute for Iranian Studies (Rasanah) issued its monthly report for January and February 2019, covering the latest developments in the Iranian arena, providing interested readers with a comprehensive insight into Iranian affairs during this period.
The report is divided into three main chapters: Internal Affairs, Arab Affairs, and International Affairs

The Ideological File: the Iranian regime sought to increase its control at the religious institution by removing any Friday prayer leader who does not show support to the state’s policy in Friday sermons. Additionally, the passing away of a number of clerics who were unquestionably loyal to the Supreme Leader Ali Khamenei represents another crisis for the regime.

The Economic File: The outline of next year’s budget reveals three basic characteristics. The first is that Iran’s spending is dedicated to  the management of state affairs instead of investment and development. The second is the inequitable distribution of expenditure with heavy spending focused on security and military aspects whereas there is little focus on productive sectors such as agriculture and industry that  are in need of massive investment. The third  is the government’s attempt to calm public outrage due to deteriorating economic conditions through increasing wages, offering some sort of limited subsidies, and delaying decisions to increase energy prices.

The Military and Security File: this report explores Iran’s accomplishments in military hardware manufacturing. It also explains how Iran suffered major setbacks during this period because the Iranian Revolutionary Guard Corps (IRGC) faced  a series of consecutive attacks  as armed opposition groups succeeded in carrying out attacks  against the IRGC in which dozens of them were killed.

Arab Affairs is divided into three chapters: Iraq-Iran Relations in which Rasanah researchers have discussed the visit of the Iranian Foreign Minister Mohammed Javad Zarif to Iraq, just four days after his US counterpart Mike Pompeo’s surprise visit to Iraq at a time when Iran considers Iraq as a lifeline and economic lung to counter pressure and circumvent US sanctions by containing Iraq as a neighboring country and turning it into a gateway to export Iranian oil to the outside world. Syria-Iran Relations: Iran during this phase seeks to reap benefits in return for the human and material costs it incurred over the past years since the start of the Syrian crisis.  Yemen-Iran Relations: Iran is still using the card of offering financial and military support to the Houthis and supporting their stance towards the Stockholm Agreement to the point of their violating it. The Stockholm Agreement is breached by the Houthis through manipulating the agreed truce by sending more military reinforcements, deploying forces and waging attacks by Iranian-made drones on the al-Anad airbase in a flagrant violation of the agreement.

International Affairs is divided into four chapters: First, Iran-US Relations reviews the United States’ attempt to unite its allies under one policy to force Iran to change its behavior through the Warsaw Conference. On the other side, Iran maintained its detrimental policies towards regional security. Second, Iran-Europe Relations sheds light on the European financial channel and the Iranian position towards it. Third, Iran-Turkey Relations analyzes the decline of the two countries’ economic indicators. Fourth, Iran-Pakistan Relations explores the dangerous deterioration in the relationship between the two countries following the kidnappings of IRGC personnel on the border by Jaish al-Adl, a Baluchi group. Iran was quick to heap blame on Pakistan for not doing enough to maintain security in the common border area between Pakistan and Iran. This also coincided with tense ties between India and Pakistan, which impacts Iran’s regional alliances. It is worth mentioning here that the International Institute for Iranian Studies (Rasanah) issued the 2018 Annual Strategic Report on Iranian Affairs, which explored and analyzed the most prominent developments in the Iranian arena, and forecasted the most likely outcomes on various aspects of Iranian affairs during the period.
The January-February 2019 Report can be viewed or downloaded as a PDF