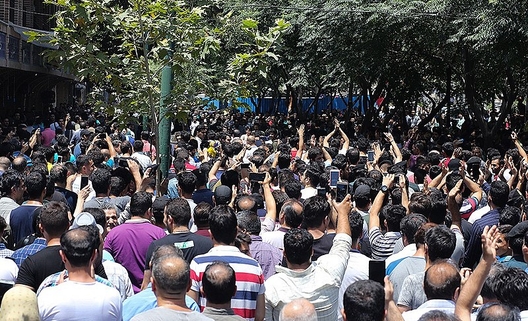 The Iranian regime has successfully navigated difficulties over the past four decades, such as domestic infighting after the 1979 revolution, the eight-year Iran-Iraq War, the ensuing economic difficulties, and the controversy over its nuclear program during the mid-2000s. Many analysts believe that these tests immunized the regime to threats. Recent months, however, have proved that might not always be the case.

It’s well known that the Iranian regime’s already shaky domestic popularity has plummeted to an unprecedented degree, especially among the working class and poor. The recent demonstrations—which broke out in more than eighty provincial towns and cities across Iran—highlight a massive decline in the regime’s support among its loyal rural base. The Iranian people are now publicly denouncing the regime in the streets, with protesters openly condemning Supreme Leader Ayatollah Ali Khamenei as well as the government. The problems are compounded by massive corruption among the government elite, as Iran continues to suffer from growing inflation, poverty, and unemployment. All these problems have led to an economic crisis, with the national currency in rapid freefall since US President Donald Trump pulled out of the landmark 2015 nuclear deal.

Similarly, Iran’s growing environmental crisis has left millions facing extreme heat, drought and sandstorms, along with severe water shortages, particularly in the south and east of the country. In the late 1990s, Lake Urmia was the largest salt-water lake in the Middle East, but has shrunk significantly. Despite this worrying environmental crisis and the ongoing protests, the Iranian government has been a passive actor as it has failed to take action to remedy this escalating disaster.

The Iranian regime’s woes aren’t limited to domestic issues only. The popularity of the Islamic Republic among Shias in the Arab World has also declined steeply in recent years. There is widespread public discontent with Iran’s policies in countries such as Iraq and Syria. In Iraq, the Iranian regime has undermined Baghdad’s sovereignty, hampered the country’s economic progress, and repeatedly attempted to blackmail the Iraqi state with initiatives like supplying it with electricity which can potentially be used as leverage if Iraqi support for Iran declines. Recent demonstrations—in the formerly loyal Iraqi bastions of Basra, Najaf, and Baghdad—were attended by thousands demanding that Iran stops meddling in Iraq’s internal affairs. Senior Iraqi officials have tried to break free from Tehran’s orbit with little success.

Baghdad’s relationship with Tehran has complicated its relationship with its Arab neighbors. The Gulf states have rejected Iran’s calls for improved relations. During the past few years, Tehran has firmly believed that improved relations with the West would force its neighbors, to reconsider their antagonistic relations with it, especially under President Hassan Rouhani’s nominally moderate government. This has been in hope of repeating Tehran’s largely positive relationship with the Gulf states under President Mohammad Khatami during 1997 to 2005. The Gulf states have rejected diplomatic exchanges with Iran without any change in its interventionist policies. They have demanded that Tehran stops interfering in their internal affairs, and withdraws its Shia militias in Iraq and Syria before any normalization can begin.

Despite Iran’s adept use of strategic gamesmanship and diplomatic tightrope-walking, the risk of failure in its regional geopolitical chess game is high, along with the odds of falling into the abyss from its metaphorical tightrope. The regime faces not only regional and global pressure from the United States and other powers, but rising public anger, and increasing religious and sectarian tensions inside the country.

The crucial question is whether there is a real desire on the Iranian regime’s part to deal with the current situation. Will the regime begin to seriously address its internal problems, or will it continue to shift the blame on to external enemies—such as the United States, Israel, and Saudi Arabia—to redirect public anger to avoid seeking real solutions? The tactic of laying blame at the feet of the “Great Satan” will allow the Iranian regime to survive until the end of President Trump’s first term in office. Tehran will watch the 2020 US presidential elections carefully and design a new strategy according to its results.

Iran seems to be seriously considering adopting this high-risk strategy, but the price of doing so could be ruinously high, especially in the event that President Trump is reelected or a different US administration with the same policies is appointed. Such an outcome means that the Iranian regime would never be able to cut a favorable deal with the United States.

President Trump has left the door open for making a different deal with terms more rewarding to Washington than the Joint Comprehensive Plan of Action, which he referred to on numerous occasions as the worst deal in history. Trump has also said he is willing to meet Iran with no preconditions. US Secretary of State Mike Pompeo has claimed that if Iran can make a fundamental change in how it treats the Iranian people and changes its malign behavior, then the US would consider entering a nuclear agreement that is worthwhile and prevents proliferation.

However, the Rouhani government is in precarious situation at home, with two ministers recently impeached and the Iranian president himself facing impeachment calls, as well as pressure from Supreme Leader Khamenei. The Islamic Revolutionary Guard Corps backed President Rouhani in his heated exchange with the US and have called on him to take revolutionary measures to resolve Iran’s economic woes. These realities make any new round of rapprochement between the US and Iran unlikely, with Rouhani looking to survive the internal crisis rather than beginning a new round of negotiations with Washington which would have the hardliners at his throat once again.