Iran officials call the floods a blessing, and a divine opportunity; the IRGC and the government accuse each other of incompetence in helping the victims 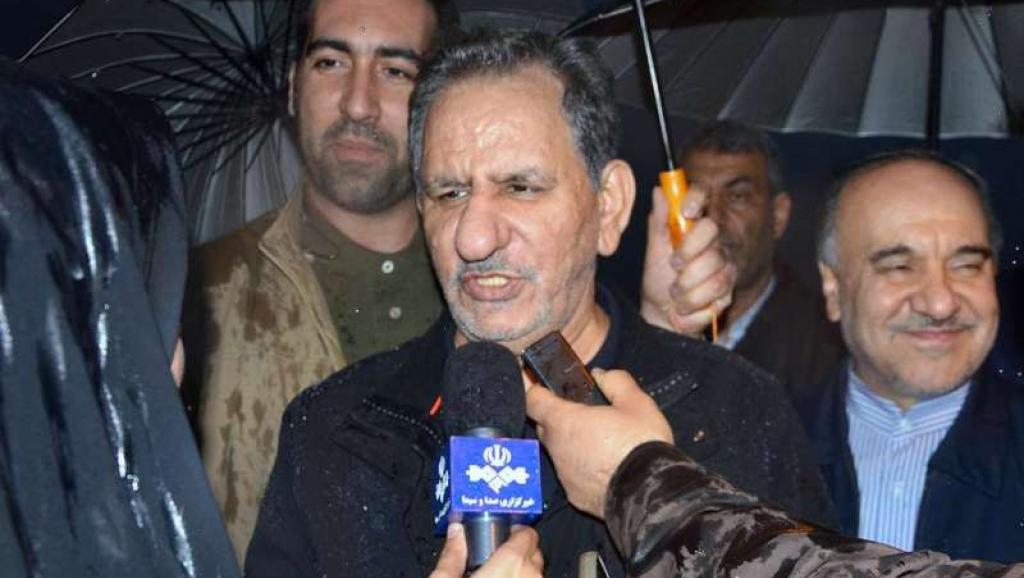 The victims of the floods in different areas of Iran are without food, shelter, and electricity; many have lost their lives; some officials have called the floods a useful and a divine opportunity, despite the widespread devastation they have caused.
The Iranian First Vice President Eshaq Jahangiri called the recent floods a “blessing” which have been useful for the country, so “one should thank God for it.” Jahangiri also asked the flood victims not to be worried about their financial losses, adding that the government would compensate them.
Meanwhile, Abasali Kadkhodai, the Spokesperson of the Guardian Council, went so far as to say that the floods in Iran were a ‘divine opportunity’ to prove that Iranian officials would be successful in helping those in flood-stricken areas.
The Iranian Legal Medicine Organization, however, announced that the number of casualties caused by the floods in the country has increased to 62 individuals up to now. According to this report, 62 dead bodies were delivered to this Organization after the devastating floods hit Iran in recent weeks.
Meanwhile, Hassan Rouhani’s government and the Islamic Revolutionary Guards Corps keep accusing each other of being incompetent in dealing with the floods and in providing timely help to the people.
The Commander of the IRGC Ground Forces Brigadier General Mohammad Pakpour lambasted governmental institutions in failing to send help to Pol-e Dokhtar in the western province of Lorestan and said that the government officials “do not dare approach the area and the people can’t take it anymore.”
In reaction, the National Disaster Management Organization (NDMO) published a statement, saying that the IRGC Ground Forces Commander came to the region after all obstacles and roads had been cleared by rescuers.
Moreover, a report was published by the IRGC-affiliated Tasnim News Agency, questioning whether the recent floods in Iran were “deliberate”, adding that the “the enemy” might be behind the heavy rains and floods.
Brigadier General Gholamreza Jalali– who is in charge of the Passive Defense Organization of Iran– remarked that he had grounds for “suspicion” that the environmental changes in Iran were related to the “interference of foreigners.”
RFI
BBC Persian

Zarif slams his US counterpart over his flood aid offer 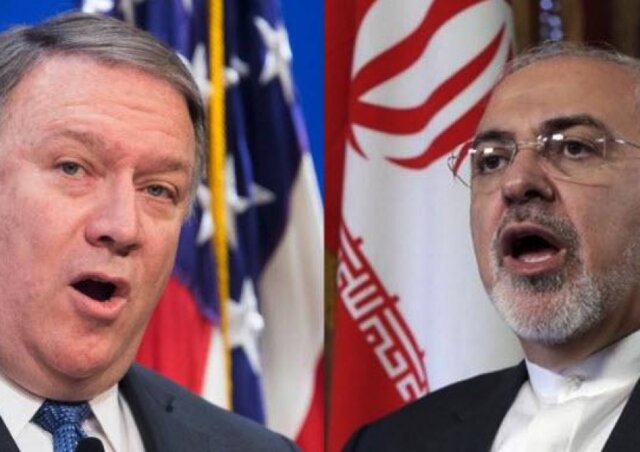 The Iranian Foreign Minister Mohammad Javad Zarif has reacted to the U.S. Secretary of State Mike Pompeo who expressed his country’s willingness to provide help to the flood-stricken people in Iran.
On a Twitter post, Zarif called Pompeo’s offer “fake news”, saying his “claim” that the US is ready to assist the International Committee of the Red Cross (IFRC) is not true as it should “direct money through the Iranian Red Crescent for relief.”
He added that the “real news” is that the IFRC cannot receive any funds due to the “illegal” US sanctions. “This isn’t just economic warfare; it’s economic terrorism,” wrote Mohammad Javad Zarif.
The U.S. Secretary of State Mike Pompeo had issued a statement, criticizing the Islamic Republic’s establishment over the recent floods in Iran for its “mismanagement in urban planning and in emergency preparedness.”
Pompeo added, “the regime blames outside entities when, in fact, it is their mismanagement that has led to this disaster.”
He then offered help by saying that the U.S. “stands ready to assist and to contribute to the International Federation of Red Cross and Red Crescent Societies, which would then direct the money through the Iranian Red Crescent for relief.”
Pompeo’s statement came a day after Iran’s Foreign Minister fiercely criticized the U.S. for its sanctions due to which aid efforts by the Iranian Red Crescent have been impeded.
ISNA
radio Farda

The profiles of 100 human rights violators in Iran 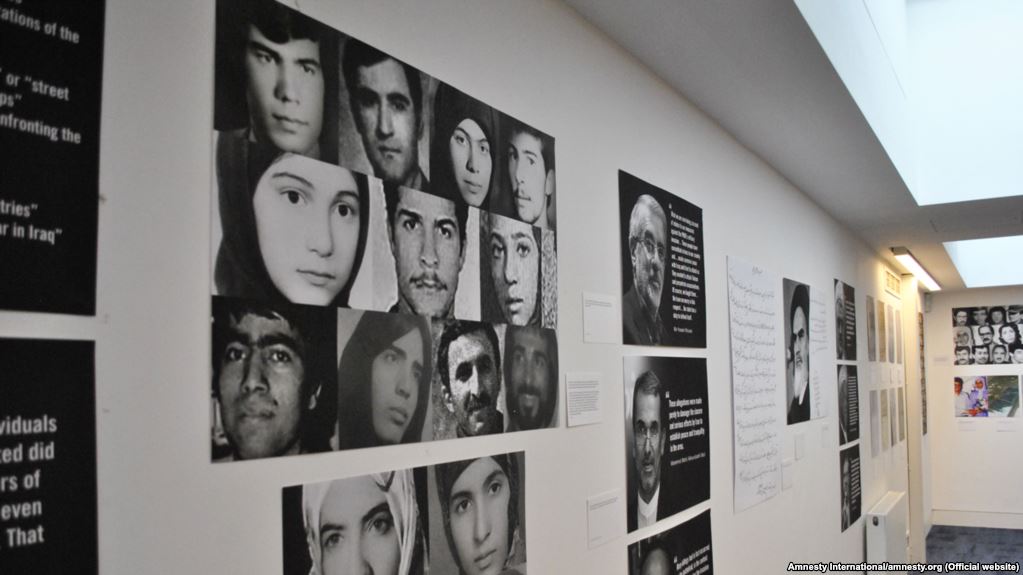 Justice for Iran, a non-governmental human rights organization, has published a book on the anniversary of the referendum which led to the establishment of the Islamic Republic, shedding light on 100 human rights violators in Iran.
The book entitled Profiles of Crime consists of the legal cases of 100 individuals—mostly the Islamic Republic’s senior officials—who have violated human rights in the past 40 years in institutions (judiciary, government, and parliament) supervised by the Islamic Republic’s Supreme Leader Ali Khamenei.
The human rights violators mentioned in this book include the Islamic Republic’s Supreme Leader Ali Khamenei, President Hassan Rouhani, the Judiciary Chief Ebrahim Raisi, the Head of Expediency Council Sadegh Amoli Larijani and the former Prime Minister Mir Hossein Moussavi.
In the book, a long list of human rights violations in Iran have been published which includes the suppression of public protests in the 1980s, the 1990s, and after the presidential elections in 2009 as well as last winter’s protests. The book also elaborates on mass executions in the first decade of the Islamic Revolution and in 1988.
Among these 100 criminals, only one has been tried: the former Tehran prosecutor Saeed Mortazavi. He was dismissed from his position, fined and sentenced 2 years in prison for his role in the Kahrizak detention center where a number of protesters arrested during Iran’s 2009 unrest were killed. However, it is not clear if he has served his prison term completely.
According to Justice for Iran, 41 individuals of these 100 violators of human rights have been subjected to international punishments due to ‘serious violation of human rights.’ These punishments include banning their travel to European countries or the United States and freezing their assets in those countries.
Radio Farda 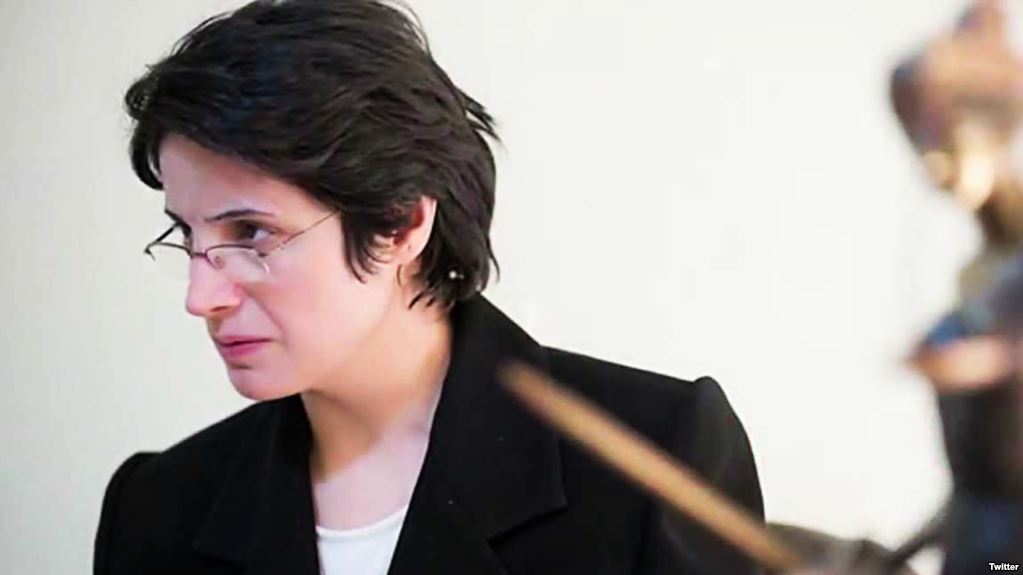 The Paris city council gave honorary citizenship of its city to Nasrin Sotoudeh,
a prominent lawyer and human rights defender, for fighting for basic freedoms and women’s rights. The members of the city council also called for the immediate release of Sotoudeh from prison.
The city council’s statement highlighted Sotoudeh’s efforts against the death penalty and her campaigns for minority rights, as well as women’s rights.
In the meantime, Nasrin Sotoudeh, in a letter, announced that the Islamic Republic’s Judiciary sentenced her to 12-years imprisonment on the charge of “promoting corruption and prostitution” for representing women who protested compulsory hijab in Iran.
She added that the judge in charge of her case used an obscene word when referring to the women who were her clients and that he can be prosecuted for his words.
Sotoudeh noted in her letter that she was sentenced to 7 years and 6 months in jail for “assembly and collusion against national security.” She was also sentenced to another 7 years and 6 months in jail for “membership in the Defenders of Human Rights Center, the Legam campaign [against capital punishment].
Apart from those charges, Sotoudeh has been sentenced to a year and a half in prison for “propaganda activities against the establishment,” and 3 years and 74 lashes for “disseminating falsehoods to agitate the public mind.” She has also been sentenced to 74 more lashes for “appearing without hijab in the judiciary.”
Nasrin Sotoudeh, in her letter, asserted that her sentence was 38 years in prison and 148 lashes in total, 12 years of which would be carried out. Article 134 of Iran’s Islamic Penal Code states that if an individual is convicted of at least three crimes, that person will serve the longest of those sentences.
Radio Farda
Iran International

Khamenei has made no mistakes in the past 30 years, says a senior cleric 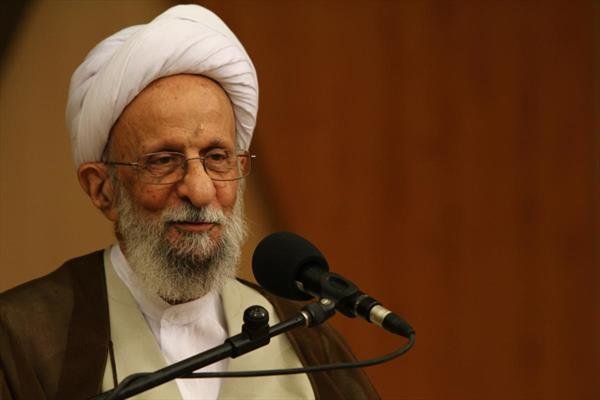 Mohammad Taghi Mesbah Yazdi, a senior ultraconservative cleric, claims that the Islamic Republic’s Supreme Leader Ali Khamenei has not made “even one mistake” during his leadership in the past three decades.
The fact that Ayatollah Khamenei has been in his position for 30 years facing the most complicated social issues without making one mistake is surprising, said Mesbah Yazdi. He added that all world leaders make numerous mistakes on a daily basis.
This senior cleric also claimed that Iran has received many “blessings” during the Islamic Republic’s establishment that “the public does not understand” because “understanding some blessings is more difficult” than others.
As for the blessings “understandable to all,” Mesbah Yazdi referred to security while saying that before the revolution people were even frightened of their own family members, thinking any one of them might be working for SAVAK (Organization of National Security and Information during the Shah’s regime).
Despite Mesbah Yazdi’s remarks, statistics indicate that Khamenei’s leadership has been neither flawless nor successful. Iran under Khamenei holds a very low position in many global indexes. Also, the country has faced many economic crises, leading to many protests in which protesters chanted slogans against the Supreme Leader of the Islamic Republic.
In Iran under Khamenei, there has been widespread corruption; a lawmaker went to the extent of urging that for corruption to be confronted that it must be confronted first in the Supreme Leader’s office.
Reporters Without Borders, in its annual report regarding freedom in the world’s media, has ranked Iran 164 among 180 countries. Global communities have objected to the issuance of long sentences against political, media, and human rights activists, as well as against attorneys.
ISNA
Radio Farda 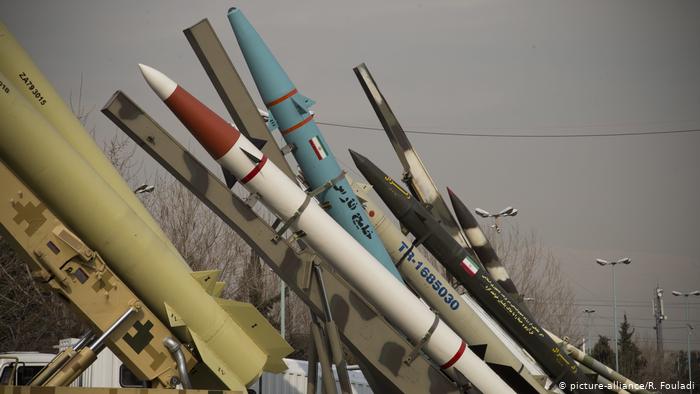 Germany, France, and Britain, in a letter to Antonio Guterres, the Secretary-General of the United Nations, have asked him to present a ‘comprehensive, thorough’ report regarding Iran’s missile activities in his next report that is set to be released in June.
Expressing their concerns over this issue again, these three countries have written that Iran’s missile program has made the region unstable and will further intensify existing tensions.
France and Britain are permanent members of the UN Security Council, and Germany has a non-permanent seat in it. They have now joined the United States in considering the missile and space program of the Islamic Republic as a violation of the UNSC Resolution 2231 and have criticized it.
The Security Council Resolution 2231, issued in 2015 with regard to the nuclear deal, requires that Iran avoids any activities in relation to ballistic missiles capable of carrying nuclear warheads. The Islamic Republic claims that its missiles have not been designed for carrying nuclear warheads, urging that it is merely testing ‘usual’ weapons, and its missile activities are within the framework of the defense program of the country.
The three European countries, in their letter to the UN Secretary-General, have specifically pointed to the launching of a satellite-carrier missile and the unveiling of two new ballistic missiles last February by the Islamic Republic, calling both a violation of the UNSC Resolution.
In reaction to the letter by Germany, France, and Britain, Iran’s Representative in the United Nations emphasized that the continuation of its missile and space program is the ‘inherent right’ of the Islamic Republic.
The ballistic missiles program of the Islamic Republic has turned into an international dispute, particularly as it is considered by Israel a threat to its existence. According to the German news agency, these missiles can target any location in Israel with their 2000km range.
In January, the US Secretary of State Mike Pompeo pointed to Iran’s missile program and activities accusing Iran of being after ‘enhancing missile capability to threaten Europe and the Middle East’.
The Iranian Foreign Minister Mohammad Javad Zarif said with regard to the letter by the three European countries that they are ‘busy appeasing Donald Trump by pressuring the UN over our defense capabilities.’ He also warned that the Europeans must accept their obligations in the nuclear deal.
Deutche Welle
Radio Farda