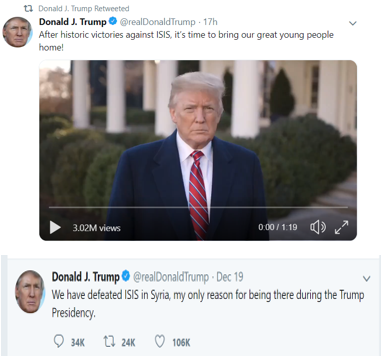 n his own words-ISIS had been defeated.
This move has been controversial the regional and international levels, as well as, at the institutional level in the United States. Also among the narrow circles within the Trump administration, there has been controversy, particularly concerning the intended result of this decision and how it will reflect on US strategy to curtail Iran’s expansionism in the Middle East, especially in Syria.
A number of observers of American policy to modify Iran’s behavior question the impact of this decision on Iran’s role in Syria at a time when the Trump administration is exerting enormous pressure to encircle Tehran, limit its regional influence, and to curb its ballistic missile program, as well as, its uranium enrichment after 2025 through two sets of economic sanctions: the first came into effect on August 6, 2018, and the second on November 4 of the same year. Also, observers believe that a hurried military withdrawal from war-torn countries before recovery leaves them vulnerable to imperial powers, turning them into theaters for conflicts and safe ha  vens for terrorist groups. This is evident by the US withdrawal from Iraq in 2011- criticized by President Trump during his electoral campaign- when it left a vacuum in this country that was exploited by Iran by it taking control of all Iraqi components through its armed militias, supporting its sectarian proxy parties and enabling them to ascend to key decision-making positions, as well as, deploying its proxy militias in the oil-rich southern provinces, and relocating Shiites in liberated territories to change the demographic composition of Iraq.

Repetition of the Iraqi scenario 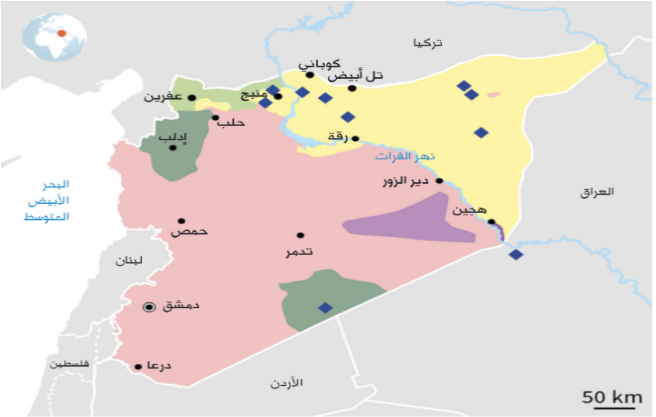 Analysts ask about the possibility of repeating the scenario of the US military withdrawal from Iraq in 2011 in terms of paving the way for Iran to take control of Syria after the evacuation of US military bases in northern and southern Syria- (blue in the map) – to achieve the following gains:
First, to implement Iranian deployment plans in Syria and to expand its influence in all state institutions, as well as, in the decision-making process and in the development of new military units by hiring militants from unstable countries, especially, after the new phase in Syria and return of diplomatic relations with some of Arab countries represented by the visit of Sudanese President, Omar Bashir on December 18, 2018 after eight years of the Arab boycott to Syria.
Second, to facilitate the smuggling of arms to the Lebanese Hezbollah that controls the Iraqi-Syrian border and the expected departure of US troops from the Tanf base on the Iraqi-Syrian border is likely to increase the military capabilities of Hezbollah and its standing in the Lebanese equation, allowing it to bypass the Lebanese government and to continue to carry arms and to send militants to Syria, bringing the process of establishing a new Lebanese government to a standstill even after electing a prime minister in May 2018.
Third, Iran and its armed militias in Iraq, Syria, and Lebanon might effectively execute the Iranian Corridor that links Tehran to the Mediterranean via Iraq and Syria, given the US military withdrawal from northern and southern Syria. Iranian political and military gains in Iraq and expansion of its influence in Syria since the fall of Aleppo in early 2017 and in other cities and provinces liberated from the Syrian opposition and terrorist groups are likely to increase post US withdrawal from Syria.
Fourth, the US military withdrawal from Syria might open the door for expansion of Russian and Iranian influence- instead of limiting it- through Iranian proxy militias in Iraq, Syria, and Lebanon that will increase Iran’s power and regional standing and even its ability to face US sanctions that were supposed to encircle and restrain it.
Some Republicans, such as Senator Lindsey Graham, a member of the Armed Services Committee; Senator Bob Corker, the Chairman of the Senate’s Committee on Foreign Relations, and Senator Marco Rubio- are highly concerned about how the United States would benefit from its withdrawal from Syria, which prompted them to reject Trump’s decision, describing it as a “hasty withdrawal.” In response, the US Secretary of Defense James Mattis tendered his resignation to President Trump on December 20, 2018. In his letter to the US President, Mattis said, “One core belief I have always held is that our strength as a nation is inextricably linked to the strength of our unique and comprehensive system of alliances and partnerships.” He added, “Because you have the right to have a Secretary of Defense whose views are better aligned with yours on these and other subjects, I believe it is right for me to step down from my position”.
On December 22, 2019, the Special Presidential Envoy for the Global Coalition to Counter ISIS Brett McGurk also tendered his resignation to the US Secretary of State Mike Pompeo in protest against the US military withdrawal from Syria and Afghanistan, reflecting a lack of coordination within the Trump administration.
Those close to President Trump believe the goals of the US military deployment in Syria since 2015 have not been achieved; ISIS has not been completely annihilated, terrorist pockets are still active in some Syrian provinces, Iranian militias are still deployed in Syria, and no political settlement has been reached nor r a constitution written. Indeed, Syria lacks the capability to restore security and to administer the liberated territories. In this concern, McGurk said, “No one is so naïve to say that the ISIS elements will disappear; therefore, we want to stay on the ground to consolidate stability in these areas.” In the same context, the US Kurdish allied factions in Syria described Trump’s decision as “a stab in the back” after the victories they had achieved against ISIS in several areas in northern Syria.

Israel gets in the way 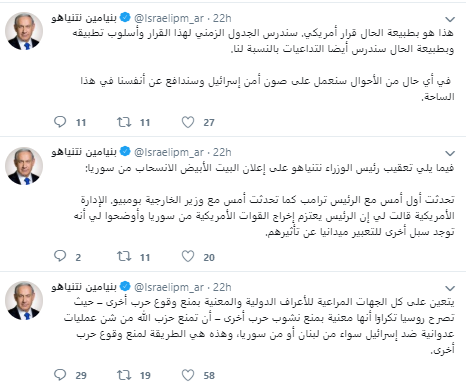 Israel attacked the American military withdrawal from Syria. In a tweet on his account on December 19, 2018, the Israeli Prime Minister Benjamin Netanyahu said, “This is an American decision.” He continued, “We will defend the security of Israel and will defend ourselves.” Netanyahu added, “I spoke to President Trump and Pompeo. They made clear that they have other ways to make their influence felt in the area.” On December 20, 2018, the Israeli Prime Minister said that his country would intensify its strikes against Iranian militias in Syria, referring to an Israeli air campaign against Iranian forces in this country and to prevent the transfer of arms to Hezbollah.
The Israeli Debka website said that the American military withdrawal from Syria was a military victory for Iran that will enable it to entrench itself in Syria to establish the planned land bridge linking it to the Mediterranean that would result in serious repercussions for Israel’s northern borders as Israel would be in direct military confrontation with the Lebanese Hezbollah and Iranian proxy militias in Syria. In the same context, the Israeli Yediot Ahronot newspaper said, “When the US withdrawal from Syria is complete, we will see Qasem Soleimani, the commander of the Al-Quds Forces frolicking and he will inform his Supreme Leader, Ali Khamenei, that another obstacle in front of Iran has been removed to enhance the Iranian presence in Syria and a second front against Israel has been opened.” On the other hand, the Russians and Turks have commended the American decision, asserting that it would increase the chances of a political settlement in Syria, while France and Britain announced their willingness to keep their military presence within the international coalition against ISIS in Syria.

The question arises: How can Iran benefit from the US military withdrawal from Syria?
According to observers, Russia and Iran are winners of the American decision. Since the American invasion of Iraq in 2003 and its withdrawal in 2011, Iran has adopted a policy of “filling the vacuum”, meaning similarly Tehran would expand its influence in Syria and preserve its gains within the new Syrian equation by rebuilding Syrian security institutions while the Russians might rely on Iranian militias to rebuild these institutions that would enable Iran to control all military organizations in the new Syria. Iran might use Syria’s to control the territories evacuated by the US troops in northern and southern Syria, that would enhance Iranian influence in this country.
Since the US military withdrawal from Syria is in the interest of Iran, what prompted President Trump to take such a decision? Does this reflect US-Israeli preparations to strike Iranian militias in Syria? But, are Washington and Tel Aviv ready for a comprehensive war in which Israel faces a multi-front war that it does not like? Or, as observers say, has this decision resulted from US-Turkish understandings due to Ankara’s demands from President Trump to exert pressure on the Kurdish factions to withdraw to the east of the Euphrates river and Turkish concessions by signing an agreement to buy the US Patriot missiles for $3.5 billion in exchange for declining the Russian S-400 deal? Or is it a decision that matches President Trump’s slogan, “America is First” that favors military withdrawal from unstable and non-allied countries that should, according to President Trump, bear responsibility for rebuilding their own institutions, given the high cost Washington has paid for its military deployment in Iraq and Afghanistan for more than a decade and a half? Or is it related to President Trump’s electoral vows to appease his supporters in the Middle States who see no advantage of military deployment in the Middle East to win a second term in the 2020 elections? Is there a relationship between this decision and the closeness of the Middle East Strategic Alliance (MESA) commencing that is supposed to be launched at a US-Arab Summit in the United States in January 2019 to face the Iranian threat in the Arab region?
All in all, there are many considerations behind the American military withdrawal from Syria that will certainly be a great opportunity for Iran to entrench its presence in this country. This decision will also play a geopolitical role not only in shaping the future of Syria, but also the future of the whole region. Indeed, this decision will take the region into a dark future due to the likelihood of regional conflicts, with regional powers vying for spheres of influence and exerting their respective pressure cards to have leverage in the region to attain their goals and ambitions.