During Eid Al-Fitr prayer in the city of Iranshehr of the predominantly Sunni province of Sistan and Baluchistan, Imam Mohammad Tayeb Malazhi surprised officials attending the Eid prayer, saying that there were forty-one girls and women who had been raped in the city. “Last Ramadan, a car kidnapped a girl coming back from work. People tried to seize the car but failed. In the evening, the girl came back home after being raped,” Malazhi said, asking officials to investigate the case and protect women who were raped.

Rapists come from powerful families
The Sistan and Baluchistan Member of Parliament, Mohammed Naeem also commented on this incident to the ILNA news agency, saying, “People in Iranshehr feel insecure.” 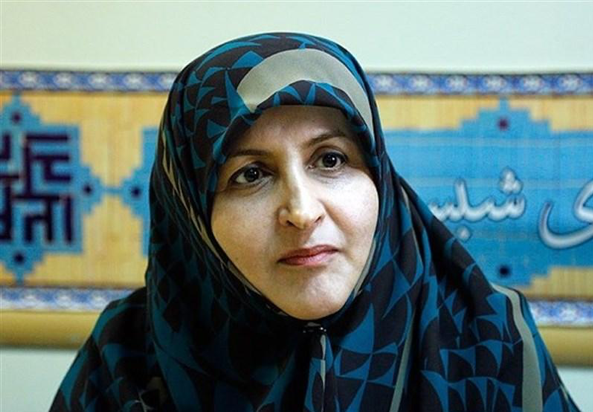 MP Taiba Siaushi: the rapists were sons of well-known families, asserting that this incident in the city of Iranshehr would be discussed in parliament

Until the time when Imam Malazhi spoke about the issue, no one knew about it, which made him say openly, “I decided to speak to everyone after the father of one of those girls came crying and complaining about what his daughter had suffered.” Malazhi boldly added, “The rapists come from powerful families; despite their influence, they are just a bunch of mobs.”

Malazhi’s speech was not just an accusation. The Member of Parliament Taiba Siaushi confirmed this in a statement, saying that she had come to know from unofficial sources that the rapists were sons of well-known families, asserting that this incident in the city of Iranshehr would be discussed in parliamen

People of Iranshehr go on Protest 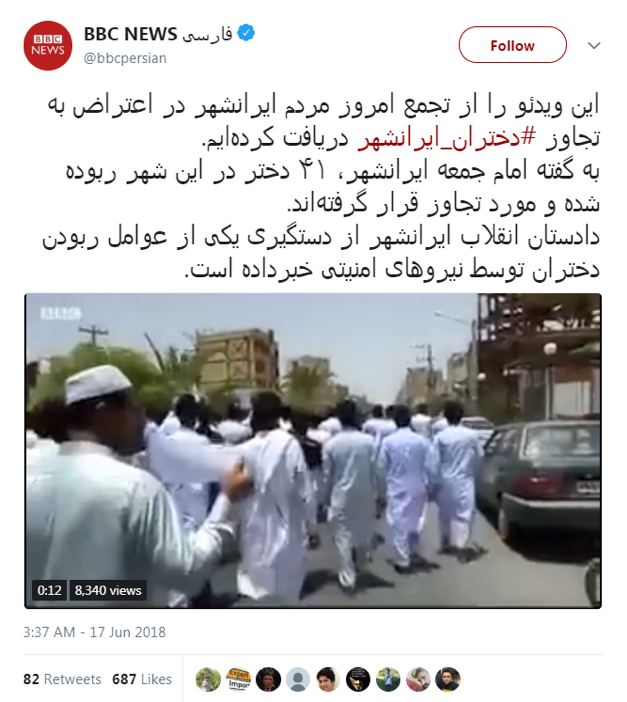 Malazhi’s statements spread quickly on social media in Iran, through a Hash tag called, “Daughters of Iranshehr.” On June 17, 2017 people of the city demonstrated outside the governorate of the province, raising slogans against the authorities and expressing their sense of insecurity.
In a tweet on social media, the Iranian official, Mohammad Blouj warned that the families of the victims feared that they would further harm their daughters after talking about the rape on them. 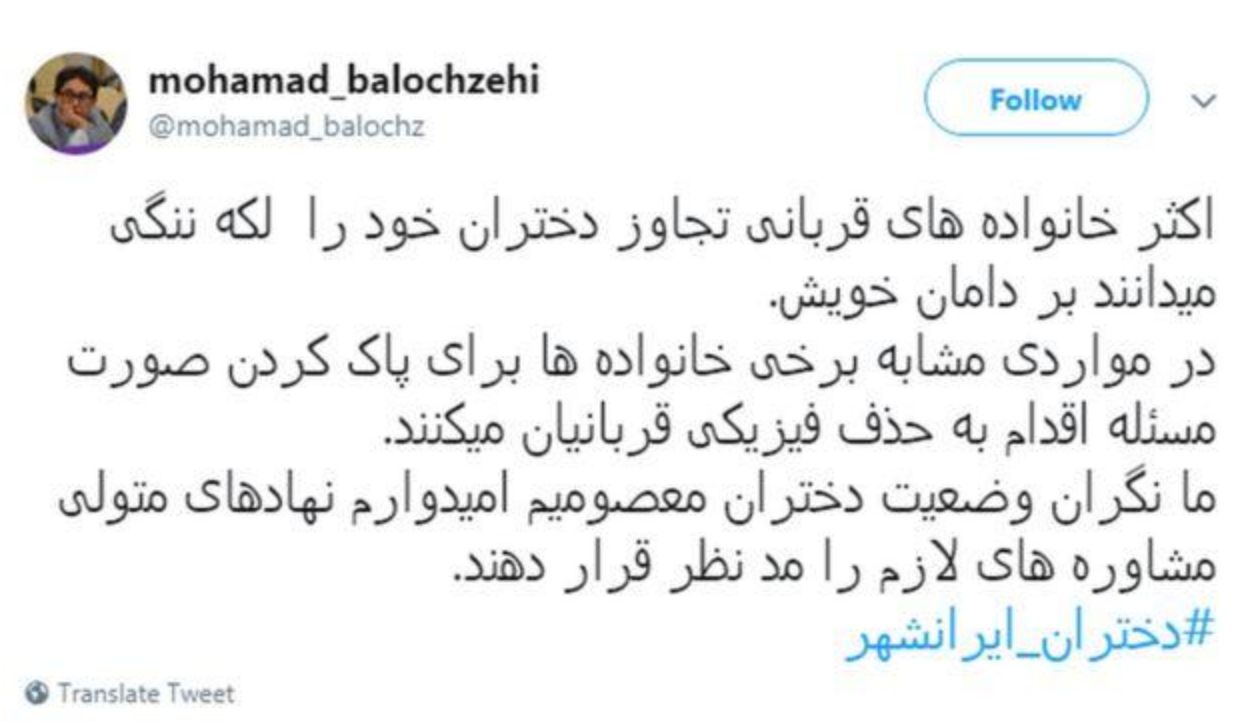 Conflicting statements by officials
On June 17, the Interior Minister Abdolreza Rahmani Fazli said that he had asked for a detailed report about the incident from the governor of the Sistan and Baluchistan province to work with the judiciary to prosecute the rapists.
One day after the remarks of Imam Mohammad Tayeb Malazhi, Prosecutor of the city of Iranshehr said, “One of the suspects in the case raised by the imam was arrested and we are searching for the other suspects.” Several days after, he added, “The arrested person is accused of kidnapping a girl during the day of Ramadan and has nothing to do with the case raised by Imam Malazhi.” Fazli said that the suspects in that case fled to neighboring cities and that the authorities were coordinating to arrest them as soon as possible.

The suspects in that case fled to neighboring cities and that the authorities were coordinating to arrest them as soon as possible.

The Chief Justice of the Sistan-Baluchistan province, Ibrahim Hamidi’s rejected the statements made by Imam Malazhi about the rape of forty-one women in the province when he said, “This number must be verified. Only three women have filed a complaint and their claims are being verified by forensic investigation.” Hamidi went further than that and said that the incident might have not been rape at all, but just disagreement between girls and boys. In an interview with the Tasnim News Agency Hamidi said, “There might be a relationship and promises of marriage between the suspects and those girls. When they differed, the girls filed complaints and claimed they had been raped.”
In fact, these statements were made by the highest judicial personality in the province even before the medical examination of the girls and the issuance of a final report on whether they were really raped or not.

Iran’s Prosecutor warns the Imam of the city
On June 18, Iran’s Prosecutor, Mohammad Jafari Montazeri warned Imam Malazhi that he would be prosecuted if he did not provide evidence on what he had claimed during the Eid Al-Fitr prayer and described his statements as lies when he said, “Anyone who spoke about that case must have evidence; otherwise, he will be tried for disturbing public opinion.” Surprisingly, Montazeri’s statement contradicted with the statements of the Member of Parliament Taiba Sushi and the Prosecutor of the city of Iranshehr.
Iran’s Prosecutor’s warning to Imam Malazhi was not just a press release, but a reality. Reports from the Sistan and Baluchistan province said that Imam Malazhi was under threat and was prevented from traveling outside the city of Iranshehr as well as talking to journalists.

The arrest of a second suspect and the Judiciary criticizes the media
On June 21, the judicial authority in the Sistan and Baluchistan province announced the arrest of a second suspect in the rape case in the city of Iranshehr with judicial authorities asserting that only three women had been raped. In the same context, the Prosecutor of Zahedan in the Sistan and Baluchistan Province announced the arrest of three suspects in the rape case in April, May, and June 2018.
The conflict is noticed in the statements of judicial officials such as the statement of the Zahedan Prosecutor who announced the arrest of three suspects only while the Prosecutor of the city of Iranshehr previously said that two suspects were arrested in June, which means the suspects in the rape case were five instead of three as announced.
The Iranshehr Prosecutor announced the arrest of another person who was not linked to the rape care on the accusation of helping the media outside of Iran to inflame the feelings of Iranians and provoke sedition by exploiting the incident.
In a tweet on social media, an observer of Baluchi Affairs who resides outside Iran, Habibullah Sarbazi, said that the person accused of dealing with foreign media was his brother.
Iran’s judiciary strongly criticized the way the media had handled the case when Iran’s Prosecutor criticized journalists and some members of parliament who reacted to the incident in Iranshehr in March and to other similar incidents when he said, “The Judiciary is not obliged to publish details about this issue,” while describing Journalists who handled this issue as “Agents for enemies of the country”.

The Ministry of Interior denies the rape of forty-one women
On June 24, the Minister of Interior reiterated that the number of forty-one women who were raped in the city of Iranshehr was incorrect. He said, “The Ministry of the Interior is investigating the case with the Ministry of Justice, but the details of this joint investigation have yet to be announced.” The Minister of Interior proved that the number announced by the Imam of Iranshehr was incorrect when he said, “Only four women filed complaints,” which contradicts the statements made by the Prosecutor of the city of Iranshehr who confirmed that the number of women who complained to the authorities was only three.
Parents protest again and light fires
In the latest development of the case, Sistan and Baluchistan television broadcasted a statement by the firefighter Chief, Ibrahim Dakhali, who said that the citizens of the city of Iranshehr burnt a pharmacy allegedly owned by the father of one of suspects in the rape case.

Confession instead of denial

Azadeh Douaji: Despite the harsh punishment of rape in Iranian law that could lead to death, women were being frequently raped and harassed in the country

On the same issue, the women’s rights activist, Azadeh Douaji said that violence against women in Iran is continuing and that this problem had to be resolved. She added that the government must confess this issue rather than deny it to find logical solutions. Azadeh noted that despite the harsh punishment of rape in Iranian law that could lead to death, women were being frequently raped and harassed in the country. Finally, Azadeh believes that the reason for such practices is the culture of blame is placed on the woman in Iran as cause of all these problems. However, Azadeh holds officials responsible for the continuation of rape and violence against women due to their negative stance on this issue.