The price of the Iranian toman in exchange for a US dollar fell sharply recently, moving from 5000 to 5580 tomans within a few hours i.e. a difference of approximately 500 tomans. Some reports confirmed that the dollar was traded through ATMs for approximately 6000 Iranian tomans. The change was recorded, overnight, from Saturday April 7 to Sunday April 8, at 6-16%.
The change in the price of currency in any country is significant as it is reflective of domestic changes a country is experiencing, such as political and economic crises, a decline in growth, a growing demand on the dollar, inflation, high import rates or a sudden demand for other economic needs. Also, there are external factors that affect the price of currency such as, wars, diplomatic crises, international blockades, or sanctions on foreign exchange transactions. In Iran, domestic and external crises have merged together. In over one year, the Iranian toman has noticeably lost its value against the dollar but the percent was not quite high when compared to the recorded on April 8 2018.
Chart 1: The first red arrow indicates the decline of the Iranian toman against the USD in the second day of the 2017 uprising [Dec. 28, 2017]. The recent Iranian Toman drop is approximately not less than 6%. (See chart 2)
Chart 1: USD to Iranian toman (March 2017- 8 April 2018) 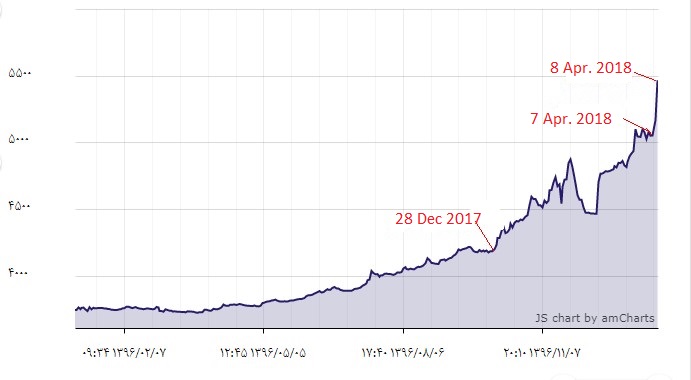 Source: Eghtesad News
When the protests mushroomed on 27 December 2017, the Iranian toman did not drop, like this; within only one day (see chart 2). Thus, if the toman’s fall because of domestic crisis, on the second day of the uprising on 28 December, was less than 0.5%, then there are other causes behind the overnight-drop recorded on April 8.
Chart 2: USD to the Iranian toman (from April 7 to April 8, 2018) 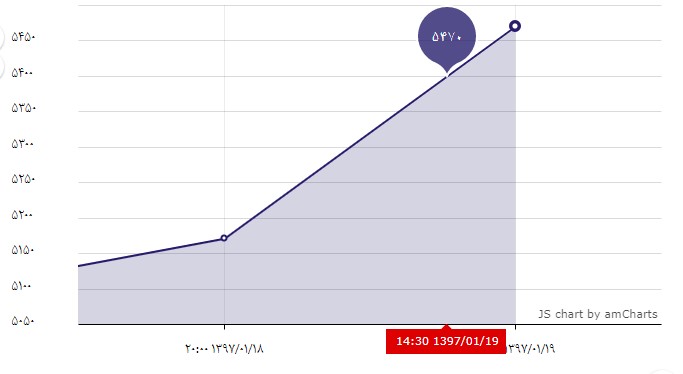 Source: Eghtesad News
» The causes of the sudden drop in the Iranian toman
We do not discuss, here, the causes behind the drop in the Iranian toman against the US dollar. The drop continues for internal and external factors that have been clarified in detail previously The most significant issue we try to tackle is the reason behind the steepest one-day decline of the Iranian toman.
The internal and external crises gradually and yet usually, in the long-run, lead the domestic currency to a sharp decline. The sudden and quick shortage of foreign currency reflects the quick and sharp decline in the amount of foreign currency the state holds. The Central Bank of Iran (CBI) announced on 9 April 2018 the currency-exchange, for students studying abroad, will be bound to free market exchange rates and not to the –less¬– official rates, as it was carried out before. And there will be a limited amount of money transfer in US dollar for one person: $500 per person per month.
Some reports, however, argue that the reasons behind the current sharp drop are external linked to Iran’s foreign policy. According to the report of Maariv (cited in Al-Jarida newspaper), Iran is preparing for a full-scale war, as the United States and Israel may attack Iran. The battle field will be the Iranian areas of influence: Syria and Lebanon— Iran’s hedge strategy, in this regards, is built upon its intelligence sources. The Iranian Revolutionary Guard Corps, or IRGC, has already prepared for the looming war through financial and strategic plans; billions of dollars have been transferred to a safe place to be used in due course. This report was published after the Iranian government and the head of the CBI were accused of transferring $30 billion out of the country. Last week, the Friday preacher in Tehran Ahmad Khatami publically threatened if the “Zionist” army attacked Hezbollah’s sites, Haifa and Tel Aviv will be levelled to the ground. However, other reports state that Iranians believe that the Israeli Prime Minister Netanyahu will convince the U.S. President Donald Trump to withdraw from the nuclear agreement. This will, indeed, lead to a full-scale war between Hezbollah and Iran from one side and Israel and the United States from the other side. That is why, a few days ago, Iran allied with Russia and Turkey. It also has occupied vast territories of Iraq and Syria. And it has boosted mutual-economic ties with China. If the claim of money being transferred in preparation for the upcoming war is true, the reason behind the sharp drop in the value of Iranian currency is revealed and well-explained. This drop raises natural concerns over more inflation and further deterioration in economic conditions inside Iran.
On the other side, Iranian justifications indicate that the decline in the Iranian stock market on April 8 panicked people to buy more U.S. dollars instead of holding on to their domestic currency. When reading the decline of the Iranian stock market that day, it becomes apparent the percent was not that high: 0.4% and the mining sector sharply dropped to 0.2%. Therefore, the sudden increase in demand for U.S. dollar is not reasonable— according to the Iranian point of view. The most interesting factor to be analyzed, here, is the mining sector, which had the stock’s biggest one-day decline. The mining sector is dominated by companies linked to the IRGC, so this drop might be fabricated to cover the large amount of money the IRGC has transferred out of Iran—If Maariv’s report is true.
The Iranian economist Abbas Valadkhani told the Al-Monitor that the recent inflation rate is not high enough to make Iranians exchange, suddenly and quickly, for U.S. dollars while the CBI adopts a contractionary monetary policy, i.e., the interest rate is high, hiking up to 18% (at least), and it is higher than the inflation rate (10% according to official statistics), so why is the US dollar price rising? He argues that the rise of the dollar is like a bubble the rich Iranians are investing in to have the best prices and gains out of money-exchange. He means that what happened triggered a sudden shock in the market, which provoked all Iranians to rush and exchange their tomans –Iran is riddled with exchange offices and Iranians are keen to preserve foreign currency. The rich can have the best gains out of the difference in exchange-rates till the dollar price returns to a relatively stable level and the crisis ends.
If this analysis is reasonable, then it explains why speculative practices have emerged right now. Simultaneously, Iran’s relations with the US and Israel are strained, the exchange of threats and provocative remarks are rising between the politicians of these countries. Is this a mere coincidence?

In sum, the sudden and unprecedented drop of the Iranian toman overnight is bound to a bigger and more dangerous domestic crisis than the latest 2017-uprising, which did not lead to a sharp decline. Thus, seemingly, the real reason is the sharp shortage of U.S. dollars because of the transfer of large sums out of Iran. Some argue, that Iran is buying more arms to counter the upcoming war against Israel and the United States, through Syrian and Lebanese territories. When reading the Iranian officials’ statements, spread over a few days, this assumption is confirmed. However, the second assumption behind the rise of the dollar is a speculative frenzy made by rich Iranians, as a bubble, to hike the US dollar and reap the best gains. This assumption would be confirmed, only if we give a blind eye to the timing of the US dollar rise and the looming tension between Iran, the United States and Israel— and if we assume this timing is not more than a coincidence.