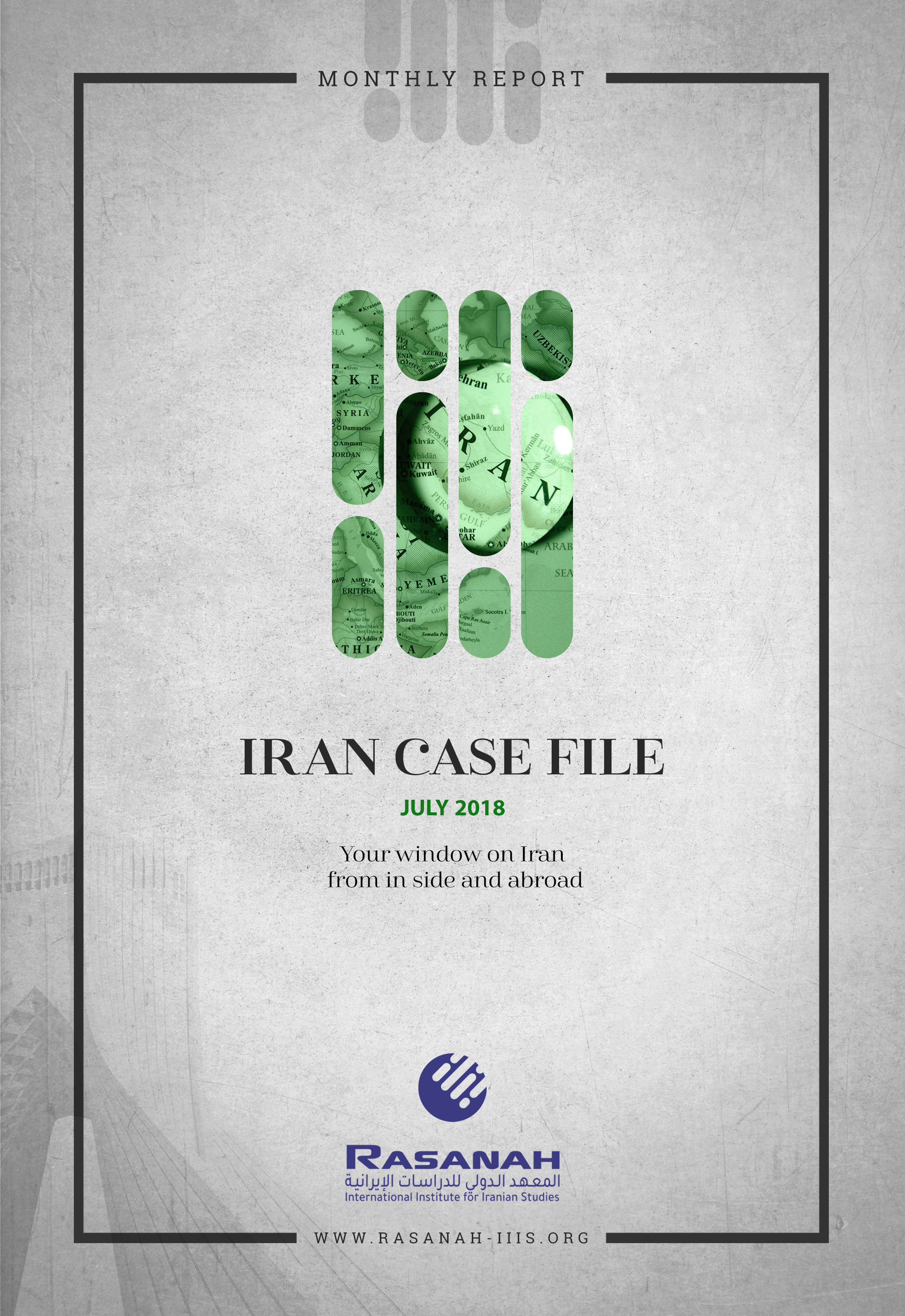 The International Institute for the Iranian Studies has issued a report on the Iranian case for July 2018. It highlighted the most notable developments on the Iranian arena and its regional and international interactions, offering a close monitoring and sequential time deconstruction for the Iranian affairs to the Arab readers, especially those interested in this respect. It included three main sections. The first one focuses on the internal affair in Iran, while the second one focuses on Iran’s interactions with the Arab affair. As to the third, it casts light on the Iranian movements on the global stage within its relations with the major world powers.

Threatening to close Strait of Hormuz and a temporary alliance
According to the internal affair report, Rouhani’s threat to close the Strait of Hormuz has caused a shift in the political alliances inside Iran. It marked a new form of alliance between the conservatives and reformists after a long history of open debates that included accusations of treason at times. On the nature and timeliness of this alliance, the report suggests that it came to send messages to the outside world that all the political forces in Iran will unite in case there is an external threat. But analysts said the conservatives’ support for Rouhani is an important factor in effecting his reformist decisions he spoke of on several occasions.

The Iraqi protests and cutting off electricity as a pressure card
The report, in its Arab affair section, offered a breakdown to Iran’s relationship with the outbreak of the protests in the southern Iraqi provinces. They started from Basra and then spilled over into the south to reach the provinces of Najaf, Maysan, Dhi Qar, Muthana, Babylon, Karbala, Qadissiya, and Baghdad. The report identified the features of the protest movement, its trends, repercussions, and future. It also broke down the launching point of the Iraqi protests, the geographical outreach, tools the protesters use for pressure to achieve their demands, slogans, and chants. The report also analyzed the motives behind the protests given the demands and questions of the protesters, which prompted them to take to the streets. Then, the report broached the timing and circumstances of the protests’ outbreak at home and abroad, the parties causing the crisis and those inflaming it. Afterward, the report covers the government’s interaction with the demands of the protesters. Finally, the report provided an assessment to the momentum of the protests, defining its trends and the horizons of the Iranian role.
The report also cast light on the horizons of the Iranian intervention in Syria within the ongoing regional and international contexts. It reviewed the Iranian insistence on keeping a military presence on the Syrian territory through offering support by arming, financing, training, mobilizing or participating in the military operations on the side of Assad regime forces in the battles raging in the south near the Israeli and Jordanian border. Also, the Iranian officials are intensifying visits ahead of the Trump-Putin summit on July 16th in order to preserve the Iranian gains in Syria and accomplish the other plans. This axis also discussed the factors impacting the Iranian role in Syria such as the Trump-Putin meeting, the Israeli demand that the Iranian militias should leave Syria, Netanyahu’s visit to Moscow, rejecting the Russian proposal to move the Iranian militias 80 kilometers from the Israeli borders, the continuing strikes on the positions of the Iranian militias in light of its push to drive the Iranian militias out of Syria.
The report then moved to the Yemeni arena and highlighted its latest developments from two main sections: the first is the advances of the pro-legitimacy forces through a geographical spread in exchange for a shrinking area held by the Houthi militias. The second is the follow-up of the violations of the Iranian-backed Houthi militia, the firing of ballistic missiles at the Saudi Kingdom without any casualties, and the targeting of two Saudi oil tankers on international waterways in the Red Sea.

The post-nuclear deal withdrawal: a possible Omani mediation
First, the report discussed two aspects. The first discussed the developments of American-Iranian relations the phase that followed the US withdrawal from the nuclear agreement, with the start of the first package of sanctions on August 6, 2018. The tension between the two sides increased, with each party issuing statements, and mutual threats that have reached the point of waving war and targeting the forces and interests of the other party. The second part of this axis broached on the US pressure on Iran, which came through working on several axes, the most important of which is to continue to impose further sanctions, strengthening cooperation with allies to pressure Iran, and pressuring Iran’s partners who seek to work away from the US sanctions. All this is aimed to isolate the Iranian regime and weaken it economically and financially, leading it to yield in the end to the US pressures.
Finally, this axis deals with the Iranian moves to counter the American pressures, in addition to what has been raised on the scene including the possibility of opening a dialogue or mediation through which the crisis can be resolved, especially talking about the mediation of Oman. The report also discussed the latest developments in the Russian-Iranian relations by highlighting the visit of Ali Akbar Velayati to Moscow in conjunction with the visit of the Israeli premier.
The meeting between Russia’s Vladimir Putin and Donald Trump in Helsinki impacted the Russian-Iranian relations. The visit comes amid mounting pressure on Iran, especially after the US pulled out of the nuke pact.

You can read Iran Case File in PDF