Lack of Transparency in the Field of Trade
The editorial of Kasbokar newspaper deals with the lack of transparency in the importing field in Iran and its impact on the market.
One of the problems is a lack of transparency. Certain inadequacies or official neglect increases the likelihood of committing certain violations and corruption. Nevertheless, the government hasn’t planned any system to control this issue, and corruption is on the rise.
The editorial adds that currently there is no difference between economic actors who work transparently and those who don’t. The reason behind it is the lack of decisive action taken by officials against violators in the market. Many of the current problems in the market are due to the same problem, as, during the past months, certain goods were imported that were not among the people’s essential needs.
This means a large amount of foreign currency was spent on importing luxury goods. This not only shows state negligence in the field of foreign trade but points to a lack of transparency in Iran’s economy.
Kasbokar – February 13

A Shadow of Bankruptcy hanging over the National Development Fund
The editorial of Ghanoon Daily focuses on how Rouhani’s government is pushing the National Development Fund towards bankruptcy by overdrawing from it to compensate for its earning deficit.
The National Development Fund is a state entity and it plays an important role in foreign exchange reserves in Iran. It was established in 2010, and its aim was to save a part of the revenue of oil, gas, natural-gas condensate and other oil products as a share for future generations from oil and gas sales.
The editorial states that even though the head of Iran’s Inspection Office said the balance of the Fund is $54.5 billion, some sources and former officials claim that its balance is between 32 to 50 billion dollars. The purpose of establishing the Fund was to build a future for the future generations, but the fund has in actuality become the governments’ piggy bank to make up for its financial deficits.
This has been going on in different governments but it has now reached its peak during the 12th government, and the Parliament Research Center has reported that if this situation continues, we will see the bankruptcy of the Fund. Despite the warning of the Parliament Research Center regarding imminent bankruptcy of the Fund, it doesn’t seem that Rouhani’s Government intends to change its approach towards the Fund.
Rouhani’s government says the decrease in the income of oil exports is to be blamed for overdrawing from the Fund. In addition, some domestic conditions such as current expenses and the defense budget, as well as international conditions such as the US sanctions, distrust in European cooperation, and the decrease in productive investments have increased the percentage of revenue being withdrawn from the Fund.
The editorial concludes by stating that such behaviors are rooted in Iran’s rent-seeking economy. Regardless of the natural and human resources, there is no resolve for making Iran’s economy non-rent seeking. As far as Rouhani’s government is concerned or any other government they follow the same oil and rent-seeking economic model, meaning that overdrawing from the Fund or any other funds is going to happen again and again.
Ghanoon – February 12 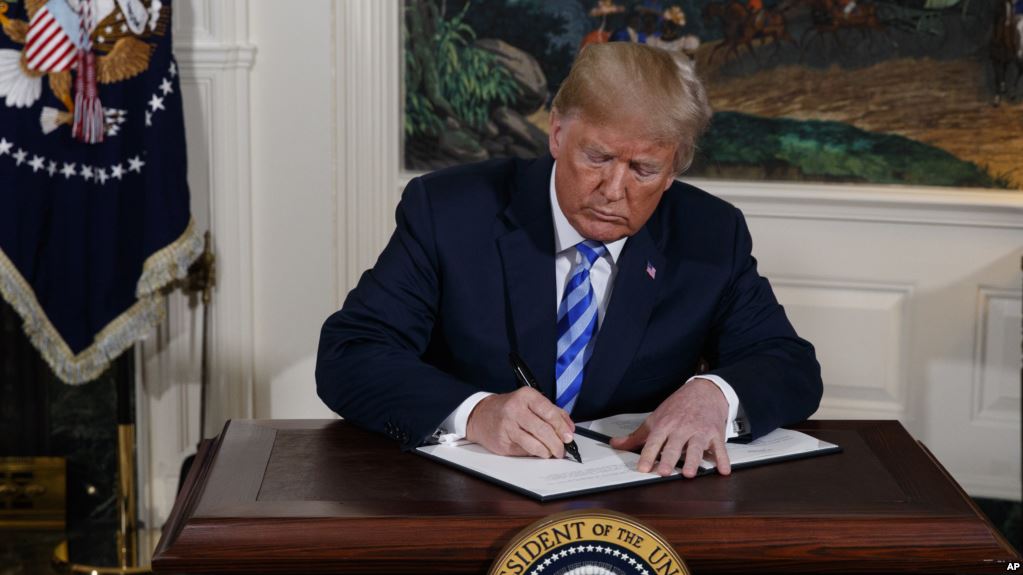 The US President Donald Trump and the Iranian Foreign Minister Mohammad Javad Zarif had a Twitter war over the failure of the Iranian Revolution. On the 40th anniversary of the Iranian Revolution, President Trump called the Revolution a total failure in a tweet “40 years of corruption. 40 years of repression. 40 years of terror. The regime in Iran has produced only 40 years of failure.”
In response, Zarif tweeted “40 years of failure to accept that Iranians will never return to submission. 40 years of failure to adjust US policy to reality. 40 years of failure to destabilize Iran through blood and treasure. After 40 years of wrong choices, time for Donald Trump to rethink the failed US.”
Before Trump’s tweet, the US National Security Advisor John Bolton had written on his Twitter account “After 40 years, the Islamic Republic of Iran has failed to fulfill its promises to uphold and safeguard the rights of its citizens. The 40th anniversary of the Islamic regime only serves to highlight four decades of failure and broken promises.”
The US Secretary of State Mike Pompeo also took part in this Twitter war “In 1979, Ayatollah Khomeini sold the Iranian people a prosperous future. 40 years later, Iran’s corrupt regime has delivered nothing but broken promises.” Along with the tweet, he released a video clip, showing worsening economic and human rights conditions in Iran during past 40 years, as well as an increase in unemployment, a drop in the value of Iran’s national currency vs the dollar, and security confrontation with religious dissidents and protesters.
Pompeo later tweeted again saying that even the Iranian President Hassan Rouhani admits to the Iranian regime’s 40 years of failure: “It didn’t need to be this way, but your ruling regime has always prioritized ideology over the interests and well-being of the Iranian people.”
On the 22nd of Bahman (Iranian calendar month), state-backed rallies were held in some cities of Iran. Eye-witnesses told VOA Persian that due to a low turnout rate in some cities, the state-run TV had to use archive images from the past.
BBC Persian
VOA 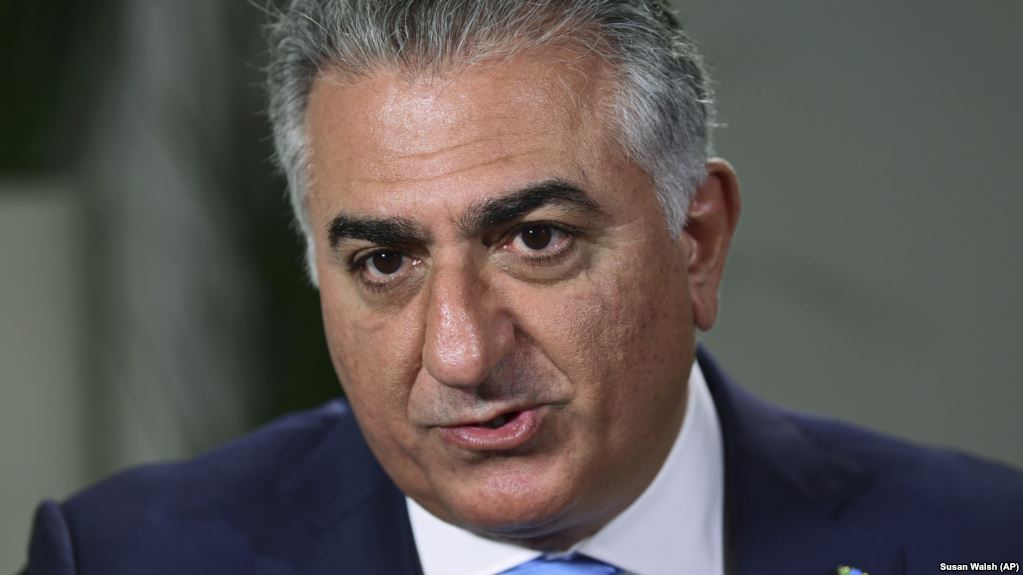 Along with the 40th anniversary of the Iranian Revolution in Iran, Reza Pahlavi, the former Crown Prince of Iran, issued a statement on social media urging civil disobedience to achieve a comprehensive reconstruction of Iran.
In the statement, Reza Pahlavi asserts that the Islamic state and Velayat-e Faqih means nothing but destroying Iran.  A large part of the statement addressed the Iranian youth, emphasizing new choices and reconstructing the country.
Reza Pahlavi urges that the way out of the current crisis in Iran is to shape a new force based on “Iranian identity” for reconstructing Iran and for the welfare of Iranians. He stresses that after overthrowing the Islamic Republic, it will be time for the comprehensive reconstruction of Iran, including its national identity.
Shirin Ebadi, Iranian Nobel Peace Laureate, too, called for international pressure to weaken the Islamic Republic through measures such as banning the broadcast of Iranian state-run TV channels through satellites.
In an interview with Reuters News Agency on the 40th anniversary of 1979 Revolution, Shirin Ebadi pointed out that from the very first day of the victory of the Revolution, human right violations began, with former officials presented before kangaroo courts and executed.
Ebadi warned against the fallout of intensifying sanctions or military attacks against Iran while asking western countries to avoid cooperating with the Islamic Republic. She also backed sanctioning the foreign trips of the Islamic Republic’s officials and confiscating their assets in western countries.
After last year’s unrest, Ebadi had asked the Iranian people to stop paying their utility bills and their taxes telling them to withdraw their money from Iranian banks to put pressure on the regime to force it to give in to their demands and to stop violent measures against them.
Last year’s protests took place in many cities in Iran. In the beginning, the protests were mostly related to Iran’s socio-economic conditions, but they then turned political with political slogans. In these protests, more than 20 people were killed.
Radio Farda – February 8
Radio Farda – February 9

No Money for the National Development Fund Next Year; An Unprecedented Budget Deficit

The Iranian parliament’s Research Center has predicted that no money would be deposited in the National Development Fund next year due to a decrease in the country’s oil sales as well as withdrawals from the Fund for military expenses.
A report published by the Research Center says that the National Development Fund of Iran is losing all its wealth because the government is overdrawing from it in recent years.
Based on the statute of the National Development Fund, at least 34% of oil revenues must be deposited into the Fund. Nonetheless, the government has only allocated 20% of the oil revenue share to the Fund in the next year’s budget bill.
Mahmoud Negahban Salami, a member of the parliament’s integration committee for Iran’s fiscal 2018-19 budget, announced that the Islamic Republic’s Supreme Leader Ali Khamenei had authorized the withdrawal of $1.5 billion from the National Development Fund of Iran to “bolster the country’s defense power.”
Khamenei had also ordered the withdrawal of $4 billion from the Fund last year, $2.5 billion of which was dedicated to military expenses.
Meanwhile, the Central Bank of Iran announced that the budget deficit of the country has reached $10,714 billion in the first 9 months of the Iranian year. Such a massive budget deficit is unprecedented in the history of the Islamic Republic.
Radio Farda
Radio Zamaneh

Rouhani: We will not Ask Permission from Anyone to Build Missiles 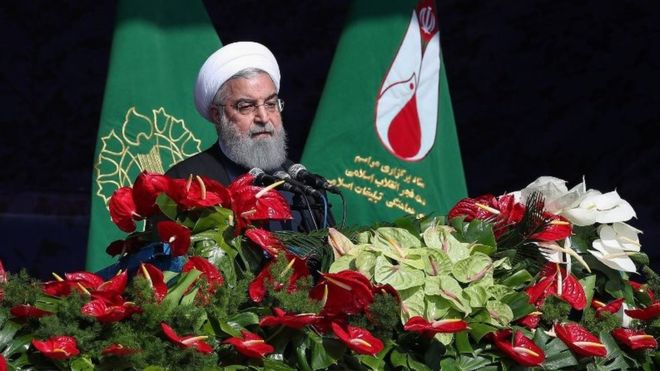 On the 40th anniversary of the Iranian Revolution, Iranian political and military officials unanimously emphasized on continuing Iran’s missile program, despite international pressure to stop it.
Iranian President Hassan Rouhani, in his speech marking the anniversary of the revolution, urged that Iran would not ask permission from anyone for building missiles. Pointing to the development of Iran’s missile program in recent years, Rouhani stressed that the Islamic Republic will pursue the same military path.
Major General Mohammad Bagheri, Chief of Staff of Armed Forces of Iran, too, emphasized on the non-negotiability of Iran’s missile program. He added that the Europeans should activate the financial mechanism to solve the Islamic Republic’s problems in doing financial transactions, and they should not raise any new expectations with regard to Iran’s missile program.
During the state-backed rally on 22nd of Bahman, the IRGC put some of its ballistic missiles on display. Recently, the IRGC announced testing several new missiles, while Iran’s government and military officials repeatedly defended the Islamic Republic’s missile program.
The United States and the European Union have expressed serious concerns over Iran’s ballistic missile program, calling it a threat against peace and stability in the region and asking Iran to stop testing missiles. Recently, the French Foreign Minister warned Tehran that if the talks over Iran’s nuclear ballistic missile turn out to be fruitless, Paris is ready to impose new sanctions on Iran.
Radio Farda
BBC Persian

Ahmad Khatami: We have the Formula to Make an Atomic Bomb 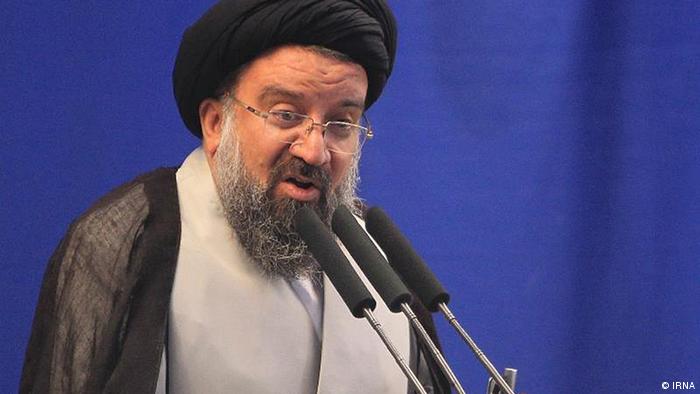 Ahmad Khatami, the spokesman of the Assembly of Experts and Tehran’s interim Friday Prayer leader, said, “we have the formula to make an atomic bomb,” adding that Iran considers it vital to have nuclear energy. Khatami noted Iran has never had the intention to make an atomic bomb. “Of course, it has the formula [to make an atomic bomb], but does not want to use weapons of mass destruction,” he asserted.
Even though the Islamic Republic’s authorities have always denied moving towards making an atomic bomb, Ahmad Khatami now admits Iran having the formula for making such bombs. He also mentioned that what keeps Iran under the present condition is the country’s missile capability.
In describing Iran’s missile capability, Khatami pointed to Iran’s “missile cities” and mid-range missiles. His remarks about an atomic bomb formula and Iran’s missile capability are made a few days after the IRGC unveiled the Hoveizeh ballistic missiles with 1000km range.
Meanwhile, Behrooz Kamalvandi, deputy of international affairs of the Atomic Energy Organization of Iran, announced that the Islamic Republic is ready to increase uranium enrichment to 190 thousand SWU. He added that the necessary conditions have been prepared to increase uranium enrichment from 3% to 20%.
Deutsche Welle
IRNA