Iran has worked to entrench Shiite militias in Sunni-majority northern Iraq to achieve two ends: first, to wipe out the armed Kurdish opposition in the region which targets the Iranian home front. Second, to change the map of the Iranian corridor to pass through the northern pathway by crossing the city of Mosul instead of relying on passing through the Iraqi desert. The Nineveh Plains region has constituted one of the elements of the Iranian regional strategy in the past period for many reasons, including Iran’s lack of tools to control and dominate this region. But the situation in the post-ISIS era has become totally different. Tehran worked to outline a full-fledged strategy to impose its control over this region, turning it into four strategic buffers or four corridors, including:

The Center of Mosul City and its Geographic Surroundings 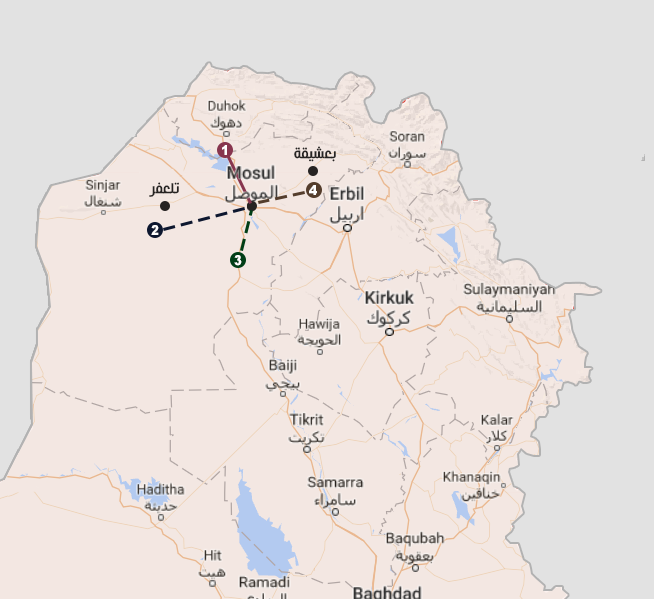 The Iranian desire to contain the security situation in the city of Mosul, the center of the province of Nineveh in northern Iraq made it pursue a strategy based on mobilizing militias. It turned Mosul society, which has just overcome its battle with ISIS, into a militia-dominated society. There are several reasons for this, including the objective to maintain the current situation controlled by the Popular Mobilization Units’ (PMU) and to take advantage of the new security situation. As a result, several armed militias emerged on the scene in Mosul, which are indirectly connected with the Qods Force of Iran. This is in addition to the ideological and security connections between the armed militias taking over the security file in the city and the Qods Force. Among the most important militias in charge of the security file in the Nineveh Plains are:

The high strategic value of the Nineveh Plains in the Iranian regional strategy was first recognized during the visit of the Iraqi Army Chief of Staff Osman al-Ghanemi to Damascus on March 17, 2019, for the sake of concluding a trilateral social meeting in Damascus. The meeting was attended by the Chief of Staff of the Iranian Armed Forces, Major Gen. Mohamed Bagheri, and Abdullah Ayoub, the Syrian Defense Minister. This forms part of Iranian efforts to rearrange the geographic status which ensures linking Tehran with Damascus and the Mediterranean. The Nineveh Plains region maintains significant centrality in the geographic belt, which Iran seeks to establish.

There are several reasons which prompted Iran to turn its attention to the Nineveh Plains region, which is far from US areas of influence. The US redeployment of military forces in the areas of northern and western Iraq, which in turn limited Iranian access to the Syrian arena through the Anbar Desert, in addition to cutting off logistical support routes, in particular, the transfers of weapons, missiles and fighters through these areas to Syria. This is in addition to the Anbar Operations Command’s seizure of most of the border crossings with Syria and Jordan. The latter move had several consequences, including the sacking of Lieutenant General Mahmoud al-Falahi, Commander of Anbar Operations. The move came after huge pressure was exerted by the PMU who demanded his dismissal for allegedly collaborating with US intelligence. He was accused of revealing several secret corridors opened by the PMU on the border with Syria.

Iran worked to connect the Nineveh Plains through three military lines, including:

The first line: this begins with the Iranian borders – Sulaymaniyah- Kirkuk and the Syrian borders.

The second line: this begins from the Iranian borders – northern Diyala-Amerli-Tukkhurmatu-Kirkuk-southern Mosul-Sinjar and Rabia to the Syrian border.

The third line: is an internal line beginning from within the center of Mosul- the Nineveh Plains-Tal Afar-Sinjar. It is used for logistical support operations.

Iran’s escalating efforts to gain influence over Iraqi geographical areas represent a well-established tenet in Iran’s national security policy. Iran is well aware of the fact that these lines will be strategic buffers within its policy of confrontation with the United States, which is seeking to push northwards. There is no room for complacency when it comes to exploiting the Nineveh Plains region by the United States, which seeks to set up military bases there. This is in light of the presence of many Iran-Hashd personnel capable of securing these areas. Perhaps the statement of the former Iranian Revolutionary Guards Commander, Major General Mohammad Ali Jafari that Iran has recruited 200,000 fighters in Syria and Iraq, is the most prominent indication of this Iranian fact. In addition to the American threats facing Iran in these areas, another variable is beginning to impose itself on the political, security, and economic realities of the city. Here we talk about Turkey, despite the old Turkish role in the city of Mosul, which is seen as one of the strategic links in Turkish national security policy, the post-ISIS period showed a clear absence of the Turkish role in the city versus rising Iranian domination. This was illustrated in the remarks made by one of the commanders of the Popular Mobilization Forces, who declined to be named. He said: “We have no problem with Turkey as a neighbor of Iraq, but we are looking at the nature of its role in Iraq, especially in the city of Mosul, and we will not allow a return. We will not allow the clock to be put back before 2014. Today, we represent the reality in the city of Mosul, and Turkey should realize this well, that Turkey has avowed aspirations in the city of Mosul. We took control of Aleppo in 2016, and today we are in Mosul, and we are well aware that there is a lot of acceptance for Turkey in the city, especially at the socio-economic level. Therefore, we do not see any problem if the Turkish role is confined to this framework. The other roles are not allowed, and we will face it strongly.”

It is no secret that Turkey seeks to achieve political objectives in the city of Mosul, specifically in the border areas associated with the areas of the Nineveh Plains, such as Sinjar, Quwair, and others, which are witnessing the presence of the Kurdistan Workers Party, as well as armed militias beginning to practice demographic change policies on the one hand and installing intelligence points on the other. Iran has recruited many PKK elements to spy on Turkish movements in northern Iraq and Syria. This comes as the file on the presence of PKK elements in northern Iraq has shifted from the Iraqi government to the intelligence arm of the IRGC. This made the file on the presence of PKK elements on Iraqi soil one of the most complicated files in Iraqi-Turkish relations, given the Iranian rejection of Iraqi efforts to close the PKK’s camps on the outskirts of the cities of Mosul and Kirkuk, which are important to Turkey.

Overall, we could say that the geographic belt which includes the center of Mosul city, the Nineveh Plains, Tal Afar, and Sinjar will fall one after the other within Iranian security-military-intelligence control. After Iran entrenched its position in the center of the city of Mosul on political and security grounds, this scenario will be repeated in Sinjar and Tal Afar on the ground in the coming period. This does not mean that Iran does not already exist in these areas. But the aim is to legalize the presence of the Shiite militias affiliated with Iran in these regions, which will determine the scope of the PMU’s control and the number of its troops, an end which Iran seeks to achieve in order to set up centers of power in the  Nineveh Plains region and to employ them to serve Iran’s strategy to achieve several aims, including:

The strategic role played by Iran in the Nineveh Plains region prompted it to give tremendous political value to this region. This was clear in the Iranian embassy’s announcement of its desire to open an Iranian consulate in this region in order to maintain a first-hand follow-up of the political and military movements there. This is in addition to its role in determining the deployment plans of Shiite militias in the city of Mosul and its outskirts as well as coordinating the roles played by the PMU’s economic offices there. Taking control of the geographic belt which connects the Nineveh Plains to Tal Afar and Sinjar means complete domination over the border strip, which extends from the Iranian city of Kermanshah to the Mediterranean. This is part of Iran’s strategy that it has worked to achieve over the recent period in order to move freely away from US and Israeli threats. Most of the military transportation lines passing through the Anbar Desert, including those established in the past or the secret routes opened by the Hezbollah Brigades, Asaib Ahl Al-Haq or Harakat Hezbollah Al-Nujabaa, came under attack by the United States and Israel. This made the Nineveh Plains region and its geographical vastness of sublime value in Iranian regional strategy.